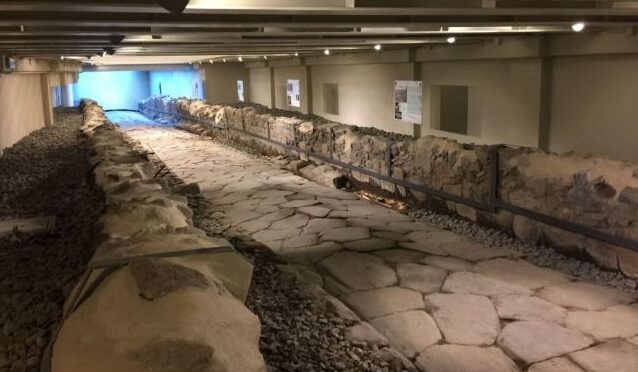 When construction on the restaurant began in 2014, the presence of the lane, which had been hidden for decades, was first discovered. The €300,000 restoration project was funded by McDonald’s Italia, and the result is thought to be the world’s first restaurant museum,’ with guests being able to see the ancient street while enjoying their burgers due to a transparent floor.

Historically, it is assumed that the 45-metre road in Frattochie, south of the city of the Italian capital, dates back to between the second and first century BC and is thought to have fallen out of use about three centuries later. It branches off the more famous Appian Way, which links Rome with the south of the country.

Ruts from wagon wheels are visible in the paving stones, which are made of local volcanic rock.

Though McDonald’s financed the restoration, the project was managed by Rome’s Superintendency for Archaeology, Fine Arts and Landscape.

Archaeologists unearthed the skeletons of three adult males, thought to have been buried after the road had already fallen out of use.

Casts of these skeletons have been returned to the original graves while experts carry out further analysis on the original bones. Local mayor Carlo Colizza said the McDonald’s project was “a positive example” of the private and public sector helping each other.

“We were able to perfectly combine business activities with respect for and appreciation of the history and archaeology,” added Colizza.

In fact, construction projects in Italy are often delayed by the discovery of ancient ruins which then have to be properly excavated.

This has been one of the major factors in the repeated delays to Rome’s third Metro line; workers have unearthed plenty of Roman treasures including a Roman barracks so impressive that the city is considering turning it into a museum.

Panels in English and Italian will give information about the history of the road and there will be a special children’s route for younger visitors to explore after their Happy Meal (or Appia Meal…). The site is also accessible, for free, without going to the McDonald’s branch.

The CEO of McDonald’s Italy said that the juxtaposition of antiquity and modernity in the McDonalds restaurant-museum was “virtuous”.

“It is a place where you can look at the future, through the past,” he said.

However, McDonald’s is more often seen as a threat to Italy’s cultural heritage than a possible help.

When its first restaurant opened up near the Spanish steps in Rome 30 years ago, there was a public outcry. Fashion brand Valentino, which has its Rome headquarters nearby, complained about the smells and noise from the restaurant, and the opening also sparked the now global Slow Food movement.

And though the chain seems to have thrived, the announcement of a new branch on Vatican-owned property, not far from St Peter’s Square, was met with fierce protest from cardinals and local residents.

Cardinal Elio Sgreccia labelled the decision to open the restaurant “controversial and perverse”, but it opened in December despite the complaints.

Elsewhere, Florence has taken the struggle to protect its culinary history particularly strongly.

In 2016, the Tuscan capital turned down a request for the golden arches to set up shop in the city’s central square, leading the fast-food chain to threaten legal action.