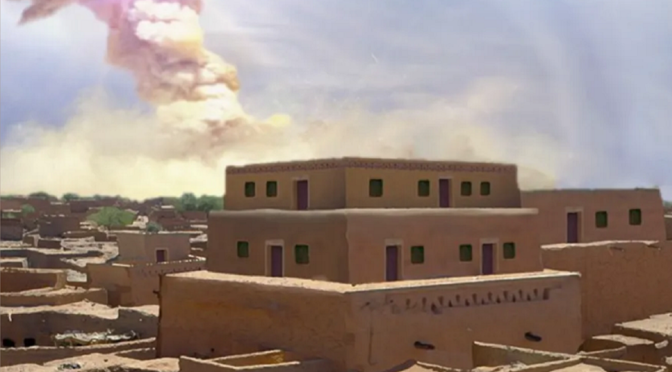 The destruction of Tall el-Hammam, a Bronze Age city in the Jordan Valley, by an exploding comet or meteor may have inspired the biblical story of Sodom and Gomorrah, a new study suggests. (“[N]otoriously sinful cities,” Sodom and Gomorrah’s devastation by sulfur and fire is recorded in the Book of Genesis, according to Encyclopedia Britannica.)

At the time of the disaster, around 1650 B.C.E., Tall el-Hammam was the largest of three major cities in the valley. It likely acted as the region’s political centre, reports Ariella Marsden for the Jerusalem Post. Combined, the three metropolises boasted a population of around 50,000.

Tall el-Hammam’s mudbrick buildings stood up to five stories tall. Over the years, archaeologists examining the structures’ ruins have found evidence of a sudden high-temperature, destructive event—for instance, pottery pieces that were melted on the outside but untouched inside.

Almost immediately, the entire city was on fire.

The new paper, published in the journal Nature Scientific Reports, examined possible causes of the devastation based on the archaeological record. The researchers concluded that warfare, a fire, a volcanic eruption or an earthquake were unlikely culprits, as these events couldn’t have produced heat intense enough to cause the melting recorded at the scene. That left a space rock as the most likely cause.

Because experts failed to find a crater at the site, they attributed the damage to an airburst created when a meteor or comet travelled through the atmosphere at high speed.

It would have exploded about 2.5 miles above the city in a blast 1,000 times more powerful than the atomic bomb used at Hiroshima, writes study co-author Christopher R. Moore, an archaeologist at the University of South Carolina, for The Conversation.

Seconds after the blast, a shockwave ripped through the city at a speed of roughly 740 miles per hour—faster than the worst tornado ever recorded. The cities’ buildings were reduced to foundations and rubble.

“None of the 8,000 people or any animals within the city survived,” Moore adds. “Their bodies were torn apart and their bones blasted into small fragments.”

Corroborating the idea that an airburst caused the destruction, the researchers found melted metals and unusual mineral fragments among the city’s ruins.

“[O]ne of the main discoveries is shocked quartz,” says James P. Kennett, an emeritus earth scientist at the University of California Santa Barbara, in a statement. “These are sand grains containing cracks that form only under very high pressure.”

The archaeologists also discovered high concentrations of salt in the “destruction layer” of the site, possibly from the blast’s impact on the Dead Sea or its shores.

The explosion could have distributed the salt across a wide area, possibly creating high-salinity soil that prevented crops from growing and resulted in the abandonment of cities along the lower Jordan Valley for centuries.

Moore writes that people may have passed down accounts of the spectacular disaster as oral history over generations, providing the basis for the biblical story of Sodom and Gomorrah—which, like Tall el-Hammam, were supposedly located near the Dead Sea.

In the Book of Genesis, God “rained upon Sodom and upon Gomorrah brimstone and fire from the Lord out of heaven,” and “the smoke of the country went up as the smoke of a furnace.” According to the Gospel of Luke, “on the day that Lot left Sodom, it rained fire and sulfur from heaven and destroyed all of them.”

Whether Tall el-Hammam and Sodom were actually the same cities is an ongoing debate. The researchers point out that the new study does not offer evidence one way or the other.

“All the observations stated in Genesis are consistent with a cosmic airburst,” says Kennett in the statement, “but there’s no scientific proof that this destroyed city is indeed the Sodom of the Old Testament.”