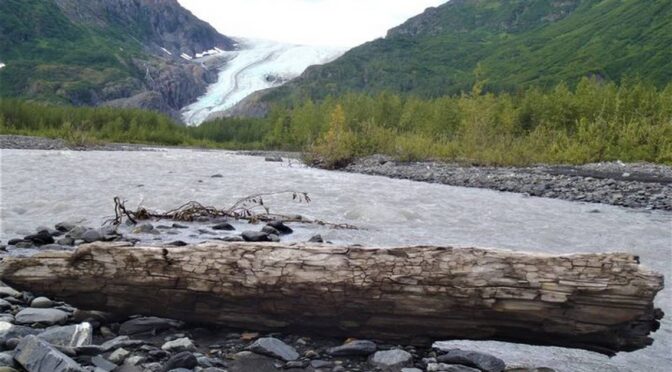 Remnants of a grand forest that vanished 1,300 years ago have begun to reappear in Alaska’s Kenai Fjords National Park.

The ancient trees that populated the forest are tumbling from the receding Exit Glacier, and they’re showing up along the banks of Exit Creek.

A photo shared by park officials shows one such tree was recently found lodged in rocks, its bark and limbs scraped away by centuries locked in ice.

“The log pictured here might at first seem to be just another piece of driftwood coming down Exit Creek, but it tells a much more interesting story,” the park wrote in a Sept. 8 Facebook post.

“This section of wood was once part of an ancient forest that was entombed by Exit Glacier around 1300 years ago, sometime between AD 641-771. As the glacier has continued to melt back these pieces of wood are slowly being uncovered.”

Scientists refer to such debris as interstadial wood, from forests that “thrived prior to the last ice age.” The forests grew over decades-long periods “between glacial advances when local conditions were temporarily conducive to forest growth,” NPS officials say.

The driftwood is often dismissed by tourists as recently fallen trees, but it offers “a unique opportunity to experience and understand the dynamic power of glaciers,” the park says.

Wildlife thrives in icy waters and lush forests around this vast expanse of ice,” the park says. “Today, shrinking glaciers bear witness to the effects of our changing climate.”

Exit Glacier has been receding since the 1800s at “roughly 3 feet a year, based on soil and tree-ring analysis,” according to a report in the Christian Science Monitor.

“Now the glacier is retreating faster, much faster, in winter and summer,” the site reported. The glacier is now receding nearly 300 feet annually, exposing sections of land that were covered for centuries, the NPS reports.