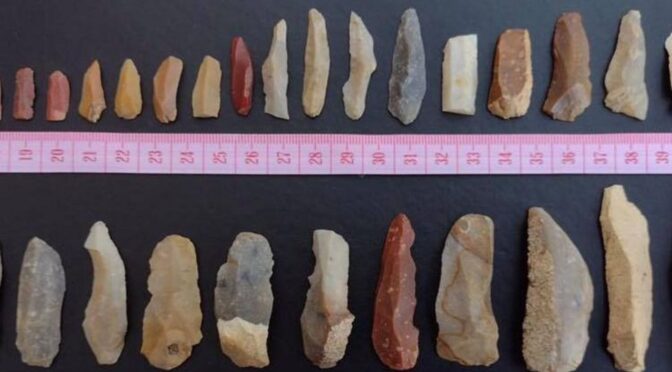 A river in Aberdeenshire has yielded more than 1,200 Mesolithic tools. The flints, which were discovered by researchers and volunteers just three days ago, were used by people who had lived along the Dee 6,000 to 10,000 years ago.

Finds include a broken piece of a hammer-shaped object called a mace head.

Archaeology group Mesolithic Deeside now hopes to uncover more clues to prehistoric life at the site at Milton of Crathes.

It has organised a week-long excavation from 11-14 November.

Flints, pieces of worked stone, have been found at Milton of Crathes in the past.

The tools are thought to have been used as scrapers for turning raw animal hide into clothing, and as blades for cutting.

Mesolithic Deeside co-secretary Sheila Duthie said: “When I started finding flints over 20 years ago, I could never have imagined contributing to such a massive project which is, without doubt, broadening our understanding of prehistoric human activity on Deeside.”

“My ideal pastime is footerin’ in flat fields with fine folk finding flints, fair or foul.”