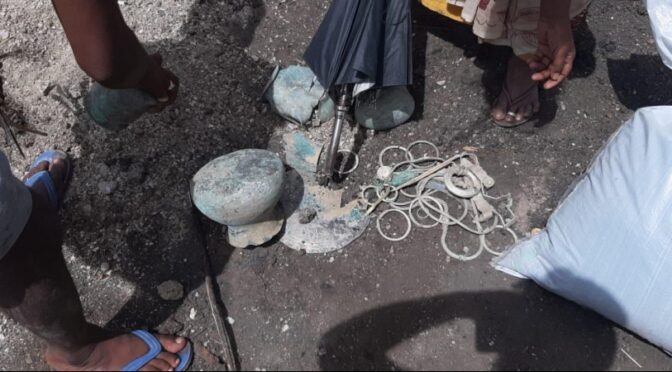 A Mohammad Siddiqui had bought the land two years ago. With the monsoon approaching, he had started tilling the land for farming.

While ploughing the field he had suddenly stumbled on the pots. He had reportedly informed the government authorities.

As per the report, most of the ornaments in the pot included large-size anklets.

The officials from the revenue department reached the spot and had taken control of the findings. A goldsmith was called to check the ornaments for their gold or silver content.

Mandal Revenue Officer, Vidyasagar Reddy was quoted by the New Indian Express as saying, “The place doesn’t have any history of finding such treasure. We will inform the archaeology department about it.”

Soon, news spread in the village about the artefacts and locals started descending on his home to take a look at them.

The pots contained almost 25 ornaments, including chains, rings, anklets and traditional utensils. Speaking to Express, Mandal Revenue Officer Vidyasagar Reddy said, “The village does not have any historical significance. We will inform the Archeology Department about the findings.”

Police and revenue officials reached the spot to inspect the treasure. A goldsmith was asked to verify if they were actually made of gold and silver