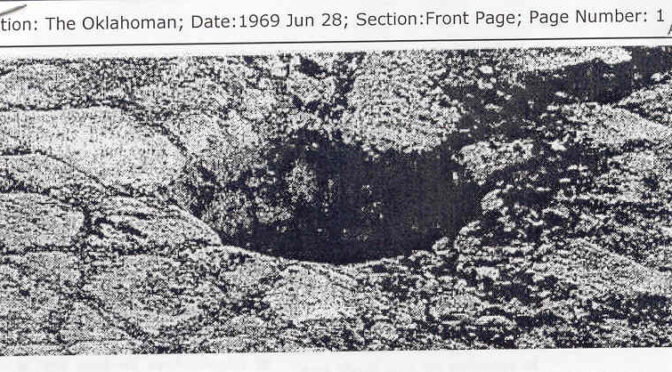 Forbidden History: Back In 1969, Construction Workers Found A 200,000-Year-Old Structure In Oklahoma

In 1969, construction workers in Oklahoma stumbled across a structure that according to many authors could rewrite history. The team of workers discovered the remains of a 200,000-year-old structure. Newspaper The Oklahoman covered the story in 1969, creating a heated debate among experts.

Could Oklahoma’s “Ancient Mosaic Floor”—containing mystery post holes—rewrite the history of not only North America but the entire planet as well?

According to a newspaper report published in 1969, the structure found by construction workers in Oklahoma dates back around 200,000 years. In nearly all corners of the world have researchers and archaeologists stumbled across things they can hardly explain. One such discovery was made in Oklahoma in 1969, when an archaeologist stumbled across what is described as a ‘massive mosaic floor, with strange post holes’.

Soon questions started popping out, and scientists kick-started a great debate. How old was the alleged floor? Is it man-made, or a natural formation?

Many questions appeared that scientists were not able to answer, some even speculated that the enigmatic floor dated back a staggering 200,000 years. Many were convinced that the tile floor was a result of man and not mother nature, but if it was in fact so old, who could have created it? And what if the enigmatic floor is the only remnant of a much greater structure?

But let’s go through the details by step.

Obviously, the wildest thing about the discovery is the age of the structure. How on Earth did they conclude it was 200,000 years old?

The first mentions of the enigmatic discovery can be traced back to The Oklahoman— the largest daily newspaper in Oklahoma and is the only regional daily that covers the Greater Oklahoma City area.

“On June 27, 1969, workmen cutting into a rock shelf situated on the Broadway Extension of 122nd Street, between Edmond and Oklahoma City, came upon a find that was to create much controversy among the experts.“

“To the layman, the site looked like an inlaid mosaic floor. It apparently looked very much like someone’s floor to some of the experts, as well.”

“‘I am sure this was man-made because the stones are placed in perfect sets of parallel lines which intersect to form a diamond shape, all pointing to the east,’ said Durwood Pate, an Oklahoma City geologist who studied the site.”

“We found post holes which measure a perfect two rods from the other two.

“The top of the stone is very smooth, and if you lift one of them, you will find it is very jagged, which indicates wear on the surface. Everything is too well-placed to be a natural formation.’”

“Dr. Robert Bell, an archaeologist from the University of Oklahoma, expressed his opinion that the find was a natural formation.

“Dr. Bell said that he could see no evidence of any mortaring substance. But Pate, on the other hand, was able to distinguish some kind of mud between each stone.”

“Delbert Smith, a geologist, president of the Oklahoma Seismograph Company, said the formation, which was discovered about three feet (0.9 meters) beneath the surface, appeared to cover several thousand square feet.”

“The Tulsa World quoted Smith as saying: ‘There is no question about it. It has been laid there, but I have no idea by whom.’”

“I am satisfied that it is not a natural earth formation and that it is manmade,” Smith later said.

Delbert Smith, a geologist, and president of the Oklahoma Seismograph Company, summed up the mystery concerning the tile floor in the Tulsa World of June 29, 1969:

“There is no question about it. It had been laid there, but I have no idea by whom.” Yet another facet of the mystery involved the question of age. There are some differing opinions as to the geology involved, but the best estimate places the tiles at 200,000 years old.”

On July 1, 1969, The Oklahoman again reported about “the discovery of a second hole through the rock strata. Measurements revealed the two holes to be exactly 16 1/2 feet apart or precisely one rod. According to Pate, the rock is Permian limestone laced with quartz grains.”

On July 3, The Oklahoman continued its coverage and “reported archaeologists discovered an ancient stone hammer at the site.”

“The mystery of a dolomitic limestone formation unearthed between Oklahoma City and Edmond was compounded Wednesday by the discovery of an object on the site which resembles a stone hammer.

Geologists who have focused their attention on the unusual formation…. were at a loss to explain the origin of either the formation or the artifact.

John M. Ware, an Oklahoma City geologist, said, ‘it simply can’t be explained within the field of geology – we need an archaeologist to give a final opinion.’

However, its age and origin may remain a mystery unless an archaeologist can be persuaded to take on the project soon. Within 20 days, construction workers will continue their job of digging out the area to begin building a foodstuffs warehouse….

Another intriguing point about the rock is that it contains marine deposits, indicating that it was laid down in the ocean…. Pate said that the formation, 100 feet by 60 feet in area, is rapidly becoming a tourist attraction.

‘People are flocking there and taking pieces of the rock away,’ he said. ‘We need to preserve it until something can be done about determining its origin.”

It seems that a couple of old newspaper lines managed to create a massive hype about a discovery that would have been treated totally differently, had no one mentioned the age of 200,000 years.

However, there are a couple of curious things that have been found in Oklahoma. One of them was discovered in 1912 in a mine in Wilburton, Oklahoma, by Frank J. Kennard; an Iron cup embedded inside a piece of coal that is 300 million years old.

“While I was working in the Municipal Electric Plant in Thomas, Oklahoma in 1912, I came upon a solid chunk of coal which was too large to use. I broke it with a sledgehammer.

“This iron pot fell from the centre leaving the impression mould of the pot in the piece of coal. Jim Stall (an employee of the company) witnessed the breaking of the coal and saw the pot fall out. I traced the source of the coal, and found that it came from the Wilburton, Oklahoma, Mines.”

The coal that originated from the mines of Wilburton, Oklahoma, is estimated to be around 300 million years old.