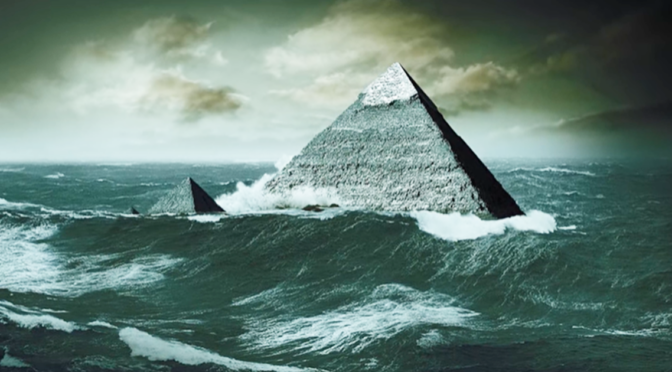 Fossil Discovery Suggests the Pyramids and Sphinx Were Submerged Under Water

The entire region of the Giza Necropolis, including the pyramids and the Sphinx, shows erosion that some say suggests the area was once submerged by seawater. A unique fossil amplifies this theory.

For over two decades, archaeologist Sherif El Morsi has worked extensively on the Giza Plateau, and in 2013, he collaborated with founder and fellow scholar Antoine Gigal of Giza for Humanity to publish his controversial discovery of this fossil.

One of the first scientists to actually discuss the issue of plateau systems being older than previously thought was Dr Robert M. Schloch. In the early 1990s, based on water erosion patterns found both on the statue and the surrounding soil, he indicated the Sphinx was thousands of years older than usually thought, dating back to 5000-9000 B.C.

Morsi has been digging deeper into the mystery ever since. During one of his photo shoots documenting the erosion patterns of many of the megaliths in the area, he made a discovery that further suggests the area was submerged at one time.

“During my photoshoot of this ancient seashore line, I nearly tripped off a second level temple block,” said Mr Morsi in an article published on the Gigal Research website.

“To my surprise, the bulge on the top surface of the block that nearly made me the trip was a petrified exoskeleton of what seems to be an echinoid (sea urchin), which is a shallow sea marine creature.”

Morsi believes the Giza Plateau was once inundated by a sea surge. The Menkara temple site, in particular, may have once been an ancient lagoon when the high sea covered the Necropolis, the Sphinx, the temple complexes, and other sites.

Other scientists have suggested the echinoid in the limestone was exposed by erosion and the creature was part of the original limestone that formed 30 million years ago.

But, Morsi countered those claims and suggested that the creature was cemented, or petrified, in a relatively more recent time, citing evidence that the creature is lying gravitationally flat, that it’s in pristine condition, that it is within the intertidal range of the lagoon, and that it is a large specimen unlike the tiny specimens typically found in limestone blocks.

“We can clearly see the pristine condition and minute details of the exoskeleton perforation,” continued Morsi, “which means that this marine creature must have petrified from recent times. It is not a body fossil as most fossils are that date back to 30 million years, but petrified by the sediment deposits that have filled its hollow.”

The inundation, Morsi believes, was rather significant, reaching a maximum of about 245 feet (75 meters) over the current sea level and creating a shoreline spanning the Khafra enclosure near the Sphinx to the Menkara temple.

Pitting and tidal notches due to waves and tidal ebbing pepper the stones in this area showing a 6.5-foot (2-meter) intertidal range, according to Morsi.

Moreover, at sites such as the Sphinx, the Sphinx temple, and the first 20 courses of the Great Pyramid, the stones are said to exhibit erosion due to deeper water saturation.

On temple blocks, there are sediment and alluvial, or material, deposits seen in shallow sea beds and lagoons. As the water recedes, it creates an oozing spongy effect in the rock.

For an echinoid to reach 3 inches (8 centimeters), the size of the fossil, it would take about 15 years. Furthermore, the amount of sediments and alluvium deposits, as well as the intertidal erosion on the shallower areas, would takes centuries, suggesting the area was flooded for quite some time.

However, it’s difficult to determine the exact year of the flooding. Over the past 140,000 years, the sea levels have fluctuated by more than 400 feet (120 meters), as major ice sheets have grown and receded during glacial cycles, according to CSIRO Marine and Atmospheric Research.