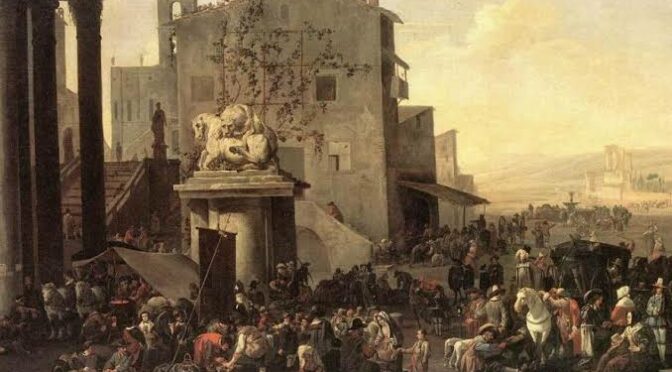 Genetic Study Reveals Exactly Who ‘The Romans’ Were

Ancient Rome was the capital city of an empire that encompassed some 70 million inhabitants. An international research team now reports on data from a genetic study suggesting that, just as all roads may once have led to Rome, in ancient times, a great many European genetic lineages also converged in the ancient city.

Results from the research present possibly the most detailed analysis to date of genetic variability in the region. They reveal a dynamic population history from the Mesolithic era (~10,000 BCE) into modern times, which spans the rise and fall of the Roman Empire.

“This study shows how dynamic the past really is,” said Hannah Moots, a graduate student in anthropology at Stanford University, who is the co-lead author of the published paper, which is reported in Science, and titled, “Ancient Rome: A genetic crossroads of Europe and the Mediterranean.”

At that time, “Rome was like New York City … a concentration of people of different origins joining together,” says Guido Barbujani, a population geneticist at the University of Ferrara in Italy who wasn’t involved in the study.

“This is the kind of cutting-edge work that’s starting to fill in the details [of history],” adds Kyle Harper, a Roman historian at the University of Oklahoma in Norman.

The study, published today in Science, traces 12,000 years of history using genomes from 127 people buried at 29 archaeological sites in and around the city of Rome.

Alfredo Coppa, a physical anthropologist at the Sapienza University of Rome, sought hundreds of samples from dozens of previously excavated sites. Ron Pinhasi of the University of Vienna extracted DNA from the skeletons’ ear bones, and Jonathan Pritchard, a population geneticist at Stanford University, sequenced and analyzed their DNA.

The oldest genomes came from three hunter-gatherers who lived 9000 to 12,000 years ago and genetically resembled other hunter-gatherers in Europe at the time. Later genomes showed the Romans changed in step with the rest of Europe, as an influx of early farmers with ancestry from Anatolia (what is now Turkey) reshaped the genetics of the entire region some 9000 years ago.

But Rome went its own way from 900 B.C.E. to 200 B.C.E. That’s when it grew from a small town into an important city, says Kristina Killgrove, a Roman bioarchaeologist at the University of North Carolina in Chapel Hill who wasn’t involved in the study.

During its growth, “probably a lot of migration [was] happening,” she says—as the genomes of 11 individuals from this period confirm. Some people had genetic markers resembling those of modern Italians, whereas others had markers reflecting ancestry from the Middle East and North Africa.

That diversity increased even more as Rome became an empire. Between 27 B.C.E. and 300 C.E., the city was the capital of an empire of 50 million to 90 million people, stretching from North Africa to Britain to the Middle East. Its population grew to more than 1 million people. The genetic “diversity was just overwhelming,” Pinhasi says.

But people from certain parts of the empire were far more likely to move to the capital. The study suggests the vast majority of immigrants to Rome came from the East. Of 48 individuals sampled from this period, only two showed strong genetic ties to Europe.

Another two had strong North African ancestry. The rest had ancestry connecting them to Greece, Syria, Lebanon, and other places in the Eastern Mediterranean and the Middle East.

That makes sense, Harper says, because, at the time, areas to the east of Italy were more populous than Europe; many people lived in big cities such as Athens and Alexandria. And Rome was connected to Greece and the Middle East by the Mediterranean Sea, which was far easier to traverse than overland routes through the Alps, he says.

“The genetic information parallels what we know from historical and archaeological records,” Killgrove says. She and others have identified individuals from imperial Roman cemeteries who likely didn’t grow up in Rome, based on isotopes in their teeth that reflect the water they drank when young—though the studies couldn’t show their precise origins. Ancient texts and words carved on tombstones also point to large populations of immigrants in the city, Harper says.

But once the empire split in two and the eastern capital moved to Constantinople (what is now Istanbul, Turkey) in the 4th century C.E., Rome’s diversity decreased. Trade routes sent people and goods to the new capital, and epidemics and invasions reduced Rome’s population to about 100,000 people.

“People perhaps imagine that the amount of migration we see nowadays is a new thing,” Pritchard says. “But it’s clear from ancient DNA that populations have been mixing at really high rates for a long time.”