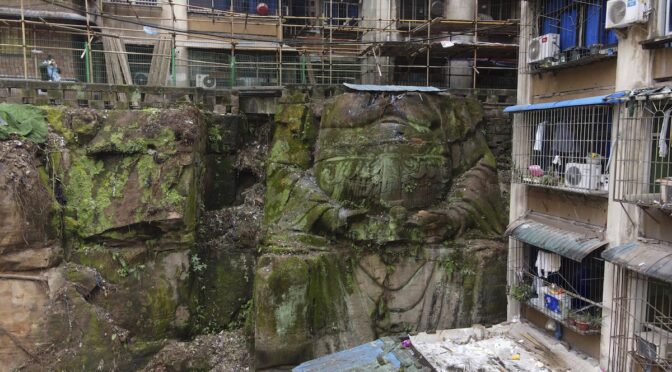 In the old neighborhood of Chongqing, southwest China, people had passed by two residential buildings constructed upon a steep hill, indifferent to what lay underneath. It turns out that these two apartment buildings that sit upon the cliff face had been carved by Lord buddha.

The massive statue — about 30-feet tall and with its head missing — was hidden by a dense coating of foliage, and only exposed during recent repairs to the residential building, according to the local Nan’an district government.

Photos of the enigmatic headless sculpture have gone viral on Chinese social media since the accidental discovery, where many have referred to it as “the Buddha,” attracting headlines and stirring instant curiosity in its history and origins.

Now only partially covered in moss, the statue is depicted seated with its forearms resting on its lap and its hands holding what appears to be a round stone. The folds and some details of the figure’s clothes are also visible.

The statue is believed to have been built during China’s Republican era (1912-1949), according to a national survey of cultural relics.

While that study was conducted just over a decade ago, the sculpture had been neglected and appears to have been completely forgotten until recently.

Its head was likely destroyed during the 1950s, and the apartment buildings around it were built in the 1980s, said the district government on China’s Twitter-like platform, Weibo.

However, experts invited by the district’s cultural relics management office to study the statue said it was not of Buddhist origin and is likely related to folk religion.

A temple dedicated to the Daoist god of thunder was once built next to the statue, though it was dismantled in 1987, the district government told state-run media outlet The Paper.

The religious statue was already designated as a district-level cultural relic before 1997, it added.

That the statue could be so quickly hidden is perhaps, a reflection of the rapid urban expansion that has unfolded in Chongqing.

In recent decades, countless structures have been built to accommodate a bustling population of over 30 million people, sometimes at the expense of historical and cultural relics. Because of the city’s mountainous terrain, many homes are built on hillsides.