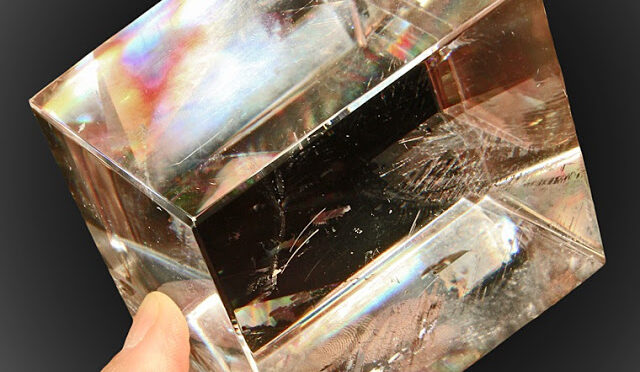 The archaeologist J.A. Clason finds extensive accounts of Viking voyages in earlier Icelandic sagas. They describe a mysterious “sunstone”, which Scandinavian seafarers used to locate the Sun in the sky and navigate on cloudy days.

So, What is Iceland spar?

Iceland spar is a crystal of calcite (calcium carbonate). Calcite is a fairly common mineral and comes in a spectacular range of colors caused by the impurities it contains.

Iceland spar is rather unique among the calcites. It contains no impurities, so it’s nearly colorless and transparent to both visible and ultraviolet light.

For centuries, the only source of this pure calcite was located near Reydarfjördur fjord in eastern Iceland, hence most of the world called it Iceland spar (spar means a crystal with smooth surfaces). The Icelanders just called it silfurberg, meaning silver rock.

There is good evidence that the Vikings used the polarizing effect of Iceland spar to navigate the North Atlantic. The constant fog and mist in the North Atlantic often make navigation by stars or sun impossible.

The second interesting feature of Iceland spar is birefringence, meaning it refracts light into two separate images, which is more noticeable.

The double image may just seem mildly interesting to you and me. But it turned the scientific world (at least the optical part of it) upside down back in the 1600s.

How did that help the Vikings?

Researchers studied a piece of Iceland spar discovered aboard an Elizabethan ship that sunk in 1592.

They found that moving the stone in and out of a person’s field of vision causes them to see a distinctive double dot pattern that lines up with the direction of the hidden Sun.

The polarization of sunlight in the Arctic can be detected, and the direction of the sun identified within a few degrees in both cloudy and twilight conditions using the sunstone and the naked eye.

The process involves moving the stone across the visual field to reveal a yellow entoptic pattern on the fovea of the eye, probably Haidinger’s brush.

When light passes through calcite crystals, it is split into two rays. The asymmetry in the crystal’s structure causes the paths of these two beams to be bent by different amounts, resulting in a double image.