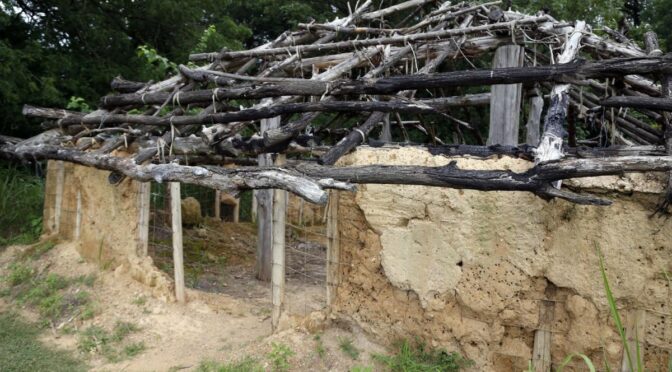 A miner’s pickaxe punched a hole through a wall of hard-packed soil 18 inches thick by drilling into a mound of earth on the banks of the Arkansas River in far eastern Oklahoma. The air hissed as it rushed to fill a hollow chamber below. And a foul odor escaped.

In the night, the miners quickly lowered a lamp, unveiling one of the most impressive archaeological finds in the history of the world, a burial chamber containing the greatest collection of Native American artifacts ever discovered in the United States. The Kansas City Star, in a headline published Dec. 15, 1935, described it as “A ‘King Tut’ Tomb in the Arkansas Valley.”

And the miners were there to rob it.

They had originally come to the now-famous Spiro Mounds looking for gold in 1933, the depths of the Great Depression. Six men called themselves the Pocola Mining Co. and pitched in $50 each to lease the site from the property owner, who needed the money to pay his mortgage and to treat a grandson’s tuberculosis, according to historian David La Vere’s 2007 book, “Looting Spiro Mounds.”

Instead of gold, at first, they found only small relics and skeletons. But collectors and souvenir hunters were willing to pay for the artifacts, so the miners kept digging.

Forrest Clements, an anthropology professor at the University of Oklahoma, seems to have been the first to realize what the miners were destroying.

Built over the course of several centuries, at least a dozen mounds stood near a vast central plaza, a seat of power for Caddoan-speaking tribes that once stretched from the Rocky Mountains to the Virginia coast.

More than 1,100 tribal leaders are thought to have been buried there along with ceremonial relics, including elaborate jewelry, weapons, blankets, beads, and effigy pipes. All of it was being looted and sold off piecemeal, with no effort to document or preserve the site.

Professor Clements tried to buy out the lease, but the miners were still hoping to find gold buried under the mounds. So Clements persuaded the state Legislature to pass an antiquities act, one of the first laws of its kind in the United States to protect archaeological sites.

A sheriff’s deputy forced the digging to stop. But the miners sneaked back later and redoubled their efforts to reach the center of one of the largest mounds. And that’s where they found Oklahoma’s version of King Tut’s tomb.

“What followed was a feeding frenzy,” according to a 2013 article in 405 Magazine. “There was neither time nor inclination for photographs or sketches to be made of the layout or holdings in the central tomb.

Witnesses tell of beads, pearls and arrowheads spilled across the site, feather capes and elaborate weavings trampled, ancient cedar poles burned as firewood and human bones piled at the edge of the camp, where they soon crumbled to dust.”

The miners stole what they could, then packed the burial chamber with black powder and blew it up. Historians consider it one of the worst examples of looting and archaeological vandalism in U.S. history. But not all was lost.

Opening Feb. 12 at the National Cowboy & Western Heritage Museum in Oklahoma City, a new temporary exhibit will bring together 175 relics from Spiro, borrowed from various collections across the country. It will be the first time, and possibly the last, for these priceless artifacts to be reunited since they were taken from the mounds.

“Our staff has worked for years to create a world-class, exciting and collaborative presentation of a people who have been overlooked for too long,” said Natalie Shirley, the Oklahoma City museum’s president, and CEO.