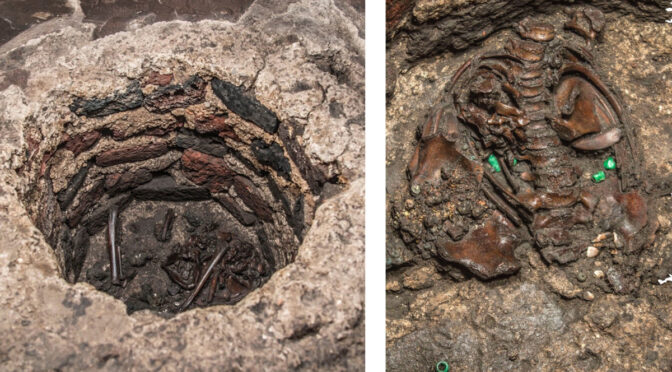 It is believed that the young child was sacrificed to the Aztec war god Huitzilopochtli in the late fifteenth century. The sacrifice of children appears to have been relatively common in ancient Southern and Central American cultures.

Aztecs undertook human sacrifices, including children, as they believed this would bring the rains their crops needed to grow. The discovery comes 12 years after the location of the first child sacrifice site at the archaeological site, now in the center of the Mexican capital, Mexico City.

The child’s bones were reportedly found along with body adornments and symbols characteristic of Huitzilopochtli.

The remains, named ‘Offering 176’, were found under the floor of a square to the west of the Templo Mayor, which was the center of the ancient city.

The Aztecs had to raise a series of stone slabs from the floor to make way for the body, archaeologists point out. They then dug a pit in the ground and built a cylindrical box in which the child was placed with volcanic rocks, stuck together with stucco.

One expert told reporters: ‘Then they filled the square with soil brought from the banks of the old lake to build another square on top of it.’

A team made up of the archaeologists Rodolfo Aguilar Tapia, Mary Laidy Hernández Ramírez and Karina López Hernández, together with the physical anthropologist Jacqueline Castro Irineo, had the mission to excavate the find of the Offering 176.

Each of the human bones and the numerous objects made with different raw materials has been carefully excavated, cleaned, and registered. The discovery comes after hundreds of skulls were recently found in Tenochtitlan that is believed to have been placed on public display in ritual sacrifices.

Tenochtitlan was built on an island in what was then Lake Texcoco in the Valley of Mexico. The city was the capital of the expanding Aztec Empire in the 15th century until it was captured by the Spanish in 1521.

At its peak, it was the largest city in the Pre-Columbian Americas.  Aztec human sacrifices were far more widespread and grisly that previously thought, archaeologists revealed in June.

In 2015 Archaeologists from Mexico’s National Institute of Anthropology and History (INAH) found a gruesome ‘trophy rack’ near the site of the Templo Mayor.

Now, they say the find was just the tip of the iceberg, and that the ‘skull tower’ was just a small part of a massive display of skulls known as Huey Tzompantli that was the size of a basketball court.

In two seasons of excavations, archaeologists collected 180 mostly complete skulls from the tower and thousands of skull fragments. Cut marks confirm that they were ‘defleshed’ after death and the decapitation marks are ‘clean and uniform.’

Three-quarters of the skulls analyzed belonged to men, mostly aged between 20 and 35. Some 20 percent belonged to women and the remaining five percent were children.