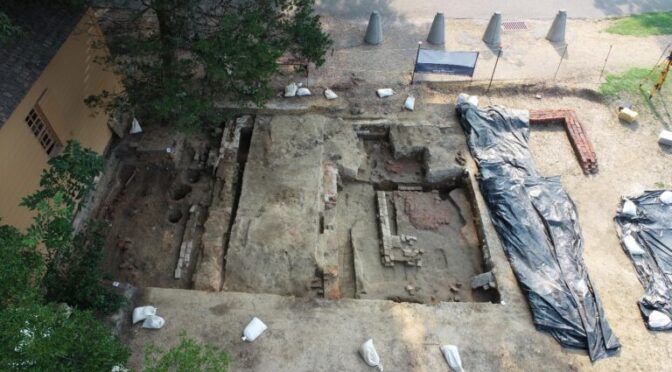 Inside the small barrier fence that encircled the S. Nassau Street dig site, there was a buzz of excitement. Because they couldn’t be certain of their latest discovery, the archaeologist team working there resisted the enthusiasm. An older 16-by-20-foot foundation extended along the eastern wall, almost to the asphalt street, sandwiched between the walls of an 1856 building.

For Colonial Williamsburg’s Director of Archaeology Jack Gary, it was a good sign that the team had uncovered First Baptist Church’s first permanent church structure dating back to the early 1800s — after a year of excavating at the site of one of the nation’s oldest Black churches.

But Gary and his team had to be sure it was the original structure.

The team got to work digging up a portion of the foundation near the front steps of where the original building would have sat. There, the team uncovered an 1817 coin, hairpins, buttons and furniture tacks. For Gary, the discoveries solidified the team’s assumptions. The Colonial Williamsburg Foundation’s Archaeology team had discovered the original early 1800s church building that First Baptist Church’s original congregation worshipped in.

For Connie Harshaw, the president of the Let Freedom Ring Foundation, an organization aimed at the preservation and conservation of Williamsburg’s historic Black churches, the discovery is one the descendants of the church never anticipated.

Harshaw is among other living descendants who can trace their lineage to the church’s first congregation. In recent years, the descendants have worked alongside Colonial Williamsburg and other community partners to ensure the church’s legacy is historically preserved and to reconcile past injustices.

“Never in our wildest imagination did we think that we would find intact burials or even the foundation of an 1818 structure. That is just mind-blowing,” Harshaw said. “It’s a pretty remarkable discovery.”

As the Founding Fathers stood in a Philadelphia statehouse and declared the nation’s independence, in direct defiance of the king, another group of individuals was reclaiming a piece of their own independence. In 1776, a group of free and enslaved Black men and women met in secrecy with the sole purpose of worshipping together. Despite the risks, as laws forbid them to congregate, they became the original First Baptist Church congregation.

From there, the congregation has become one of the oldest Black churches in the country, creating a community that has continued its legacy for centuries. While the original congregation continued to meet, it would not have a permanent structure until the 1800s when a Williamsburg man, Jesse Cole, moved by the congregation’s hymns and prayer, offered them a building on what is now Nassau Street in the Historic Area. The structure on the property was referred to as the Baptist Meeting House.

Its existence was short-lived, however, as a tornado destroyed it. The 1856 building was constructed over top of it, then it was paved over into a parking lot, remaining buried for 165 years. The Colonial Williamsburg Foundation announced Thursday that its archaeological team discovered the structure which will bring the organization one step closer to its final goal: preservation, recreation and interpretation.

The artefacts that were uncovered underneath the original structure, hairpins, buttons and furniture tacks, reveal a lot about what the original congregation was wearing at the time, according to Gary. The items were uncovered in front of where the church steps would have been located. As the church was swept, the inside contents made their way over the front steps and into the ground only to be uncovered nearly 165 years later, Gary said.

“It was an exciting day when we made that discovery,” Gary said. “Now, we can start to better understand the building and the people who congregated there. That’s what makes this project so special.”

Colonial Williamsburg archaeologists, under the guidance of First Baptist Church, first began digging at the site in September 2020. The team has been working in phases since then in hopes of uncovering the previous church structures, including Thursday’s discovery of the 1818 Meeting House.

In addition to the original structure, the archaeologists have discovered at least 25 confirmed human burials with the first bone fragments uncovered in February. During Phase II of the dig, one of the first priorities was to determine how many individuals may be buried in the west end of the South Nassau Street lot after discovering evidence of grave shafts during the first phase.

By July, the team had uncovered 21 grave shafts. The most recent grave was discovered just last week, likely predating the church building, inside the foundation of the 1856 church. A community meeting is scheduled for Oct. 30 for the church’s descendants to discuss the next steps and make decisions regarding the investigation of the burial sites.

The discovery of the 1818 structure comes ahead of the church’s community-wide 245th-anniversary celebration that will begin Saturday and conclude mid-November.

When the church was relocated in 1956 to 727 Scotland St., some of the descendants remember worshipping, as children, in the 1856 building. The recent discoveries, for many, have been a long time coming, Harshaw said.

“It has been more than a year for them, it has been since 1956. They were disappointed and hurt when the church on Nassau Street, was levelled and paved over with a parking lot,” Harshaw said. “They’ve carried the history of that church and their memories with them.”

Excavations at the Nassau Street site will continue from 9 a.m. to 4 p.m. on weekdays, weather permitting. The public is welcome to view the site. This is an ongoing multi-year project funded primarily by individual donors.