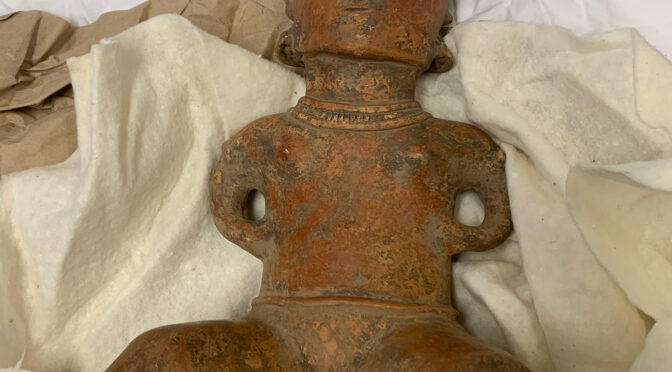 Hundreds of Artifacts Returned to Mexico by Arizona Homeland Security

The pieces were recovered after two separate investigations by HSI special agents assigned to Phoenix and Nogales, Arizona. Scott Brown, special agent in charge of HSI Phoenix, presented the relics to Mexican Consul General Ambassador Ricardo Santana and Jose Luis Perea, director of the Mexican Institute for Anthropology and History (INAH) in Sonora, Mexico. The Mexican officials accepted the relics on behalf of the people of Mexico.

“The cultural significance of artefacts from regions around the world extends beyond any monetary value,” said SAC Brown. “The pieces, like those discovered, are fragments of history; and it is an honour to return them to their rightful home country. HSI fully supports the importance of antiquities and cultural property, and it is through these repatriations that new generations are able to experience a part of their nation’s story.”

The HSI Phoenix case began Oct. 8, 2013, when special agents were contacted by a representative of the Chandler Historical Society regarding multiple suspected pre-Columbian Chinesco-Western pottery figures with origins as far back as 100 B.C., which were in the possession of the City of Chandler Museum.

HSI special agents promptly met with the museum’s director who turned over 10 Shaft Tomb artefacts for further review and investigation. Through archaeological expert analysis, the authenticity of these artefacts was confirmed as being more than 1,500 years old and originating from Mexico.

HSI special agents met with the Mexican consulate general of Nogales, director of archaeology in Sonora, Mexico, chief archaeologist for the Cerro de Trincheras zone to view the artefacts, which were authenticated as historically significant artefacts originating from Mexico.

Results of this meeting confirmed the 10 ceramic figurines to be Shaft Tomb artefacts believed to accompany deceased individuals during the last rite of passage circa 100 B.C. to 500 A.D. from the geographic regions of Nayarit, Jalisco, and Colima, Mexico. The archaeological experts estimated the value of the artefacts between $26,100 and $45,700.

The HSI Nogales case began in October 2012, after HSI special agents were contacted by U.S. Customs and Border Protection (CBP) regarding numerous suspected Pre-Columbian artefacts that were declared by two Mexican citizens who presented themselves for entry into the United States from Mexico via the Mariposa Port of Entry in Nogales.

HSI Nogales took custody of 267 artefacts. The items detained included arrowheads, axe heads, hammerheads, spearheads, and small stone carvings. Archaeological expert analysis subsequently confirmed the authenticity of the artefacts as being between 1,000 and 5,000 years old and of significant cultural value.

In March 2013, HSI Hermosillo representatives contacted INAH in Sonora to arrange a meeting with HSI Nogales at the CBP Nogales administrative offices to conduct a thorough examination of the detained artefacts.

The three INAH research professor archaeologists viewed the artefacts and concluded that the 267 individual pieces were pre-Hispanic (aka pre-Columbian) cultural artefacts of Mexican origin from Northwest Mexico. INAH appraised the artefacts at over $124,000.

HSI concluded that all the seized pieces were imported into the United States contrary to law pursuant to the United Nations Educational, Scientific and Cultural Organization (UNESCO) Convention of 1970 and the Cultural Property Implementation Act, and therefore were to be returned to their proper home of Mexico.

U.S. Consul General in Nogales Laura Biedebach underscored, “The United States government is committed to combating the theft and trafficking of cultural heritage and to preserving and protecting it where it is found. We will continue to cooperate across agencies and borders to ensure that our citizens can enjoy their cultural heritage. We have much work to do to preserve our history for the next generation, but we are in this together and proud to be your partners.”

“This repatriation comes at an opportune time, in the year of a very significant commemoration for Mexico, the 500th anniversary of the taking of Tenochtitlan, which was a heartrending encounter between the cultural universes of Western Europe and America, said INAH Director Jose Luis Perea. “This event allows us to deeply recognize the pre-Hispanic cultures of Mexico, as well as the resistance and presence of its contemporary indigenous peoples.”

HSI is the investigative arm for the U.S. Department of Homeland Security and plays a leading role in criminal investigations that involve the illicit distribution of cultural property, as well as the illegal trafficking of artwork, specializing in recovering works that have been reported lost or stolen. HSI’s International Operations, through its 80 offices in 53 countries, works closely with foreign governments to conduct joint investigations.

Despite increasingly aggressive enforcement efforts to prevent the theft of cultural heritage and other antiquities, the illicit movement of such items across international borders continues to challenge global law enforcement efforts to reduce the trafficking of such property. Trafficking in antiquities is estimated to be a multi-billion dollar transnational criminal enterprise.

The public, government and private institutions often aid HSI in identifying, investigating and prosecuting illicitly trafficked cultural property. If you have information about the illicit trade of cultural property or art, call the ICE Tip Line at 1-866-DHS-2-ICE or report tips online.