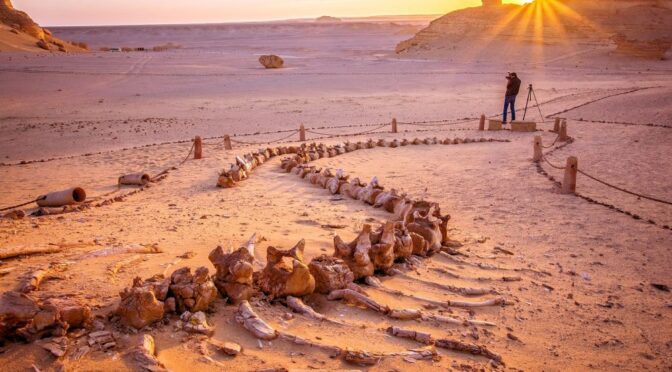 In the middle of Egypt’s desert, there is a Valley of Whales which is millions of years old

There is an ancient Egyptian desert, once a vast ocean, that guards the secret of one of the most remarkable transformations in the evolution of life on planet Earth. Egypt is known as the land of Pyramids, Pharaohs, and golden sands. Countless jewels have been excavated from beneath Egypt’s sands, revealing a treasure trove of a time long gone. Archaeologists have discovered pyramids, temples, entire cities, and finds whose value is incalculable.

But there’s more to Egypt than the Sphinx, the Pharaohs, and its incredible pyramids, and there is more to this wonderful land than the Valley of Kings. Some 160 kilometres southwest of the Pyramids at the Giza plateau is a treasure trove of history. There aren’t any pyramids, temples, or mummies buried there, but it is a site of great importance. In fact, Wadi El Hitan was designated a UNESCO World Heritage Site in 2005.

The reason? Hundreds of fossils of some of the earliest forms of whales, the archaeoceti (a now extinct sub-order of whales), lie buried beneath the desert sand.

The story of Wadi Al Hitan is worthy of the most impressive tales. Some 40 million years ago (give or take a few), massive beasts swam in the vast prehistoric Tethys ocean. It was home to numerous creatures that have long since been forgotten. One of these massive animals, over 50 feet long, had massive jaws and jagged teeth. It looked unlike anything living inside Earth’s oceans today. The creatures eventually died, sinking to the prehistoric ocean seafloor. Tens of thousands of years went by, and a fine protective mantle of sediment eventually built up over the beasts’ bones.

The prehistoric sea receded. The former seabed transformed into a vast desert as powerful winds armed with fine grains of sand began covering the surface little by little, eventually preserving the whales that would remain hidden for time to come. Eventually, it became another one of the many secrets hidden beneath the golden sands of Egypt. Time passed by, and the planet’s geology and geography warped. The planet’s crust smashed India into Asia, giving birth to the breathtaking Himalayas.

Humankind came into existence, and Africa saw the first humans stand straight, evolve, and eventually build a civilization that would forever become imprinted in history. The mighty Kings of Egypt build incredible mastabas, which evolved into massive pyramids. Egypt flourished and fell, and the land of Pharaohs was no more.

Then, more than one hundred years ago, massive fossils of long-gone beasts were revealed by the wind, which delicately preserved and revealed the fossils since time immemorial.

The site is so important that scientists argue the site reveals evidence for the history of one of the greatest mysteries in the evolution of whales: the species’ appearance as an ocean-going mammal from a previous life as a land-based animal. Today, the site is a desert covered with geological features that make it even more unique. But in the distant past, Wadi El Hitan was a massive ocean where whales swam, hunted, and reproduced.

As the site is dubbed, the Valley of the Whales is the most important site in the world to demonstrate the above-mentioned evolutionary process. The way of life of these mammals is accurately portrayed during their evolution.  The number, concentration, and quality of fossils are unique to Wadi El Hitan, a time capsule providing evidence of millions of years of coastal marine life and evolution. These remains show these animals losing their hind limbs, hydrodynamic bodies (like those of modern whales) while presenting primitive bone structure aspects. Other fossil materials found at the site allow reconstructing the environment and the ecological conditions of the time.

Wadi el Hitan portrays the form and way of life during the transition from land animals to ocean-going mammals.

Although the fossils discovered at the site may not be the oldest, their great density in the area and the quality of their preservation is to the degree that even some stomach contents have remained intact.

Thanks to the discovery of fossils of other early animals like sharks, crocodiles, sawfish, turtles, and rays, scientists have been able to reconstruct the environmental and ecological conditions of the site accurately.

The site and the first fossil skeletons of whales were discovered at the Valley of Whales in 1903. But for more than 80 years, the site was forgotten, mostly due to the difficulty of accessing the site.

However, in the late 1980s, as all-wheel-drive- vehicles become widely available, people started visiting and documenting the site. Eventually, the Valley of Whales would attract scholars, fossil collectors, and even tourists. People would go there and collect fossils without properly documenting or conserving the fossils. This led to the disappearance of many fossils from the site, prompting warnings for the site to be adequately conserved.

One of the most important discoveries at the site was the largest fossil discovered there, with 21 meters in length. The fossil showed clear traces of five-fingered flippers on its forelimbs and an unexpected existence of hind legs, feet, and toes, features that were precisely unknown in an archaeoceti. The site exceeds the values of different similar sites in terms of the number, concentration, quality of its fossils, and their accessibility, found in an attractive and protected landscape.

The site includes an impressive assemblage of fossilized skeletons of Archaeoceti (primitive whales documenting cetacean transition to marine life), sirenians. It also includes well-preserved fossils of reptiles and shark teeth that date back to around 40 million years ago. Scientists have identified the fossils of crocodiles, sea turtles, and the fossilized remains of sea snakes at the site. Many species of bony fish, sharks, and rays are represented at the site, but the largest number of fossils are isolated small teeth, which are often inconspicuous. There are also larger fish fossils, including the rostra and pegs of sawfish. In fact, the site features a sawfish rostrum of 1.8 meters long.

Wadi El Hitan is also home to a wide variety of fossilized shells and disc-shaped nummulite fossils. According to scientists, the strata in Wadi Al Hitan belong to Middle Eocene, and it includes a vast mass of vertebrate fossils within 200 km2 of the desert. While researchers have identified many whale fossils, they have also catalogued and reported sea cows’ fossils, among over one hundred different fossils. Scientists were able to reconstruct their origin and conclude their form was serpentine, and the animals were carnivorous.

The site has been found to feature typical streamlined bodies from modern whales and shows us clear evidence of some of the primitive aspects of skull and tooth structure. In other words, the valley of Whales in Egypt is a unique site not only because of its diverse fossil library but because of the examples of fossils and their respective age.

The site has managed to remain well-protected because not many people access it. In fact, it is believed that between 1500 and 2000, tourists venture out and visit the site, which is accessible through unpaved and unmarked desert roads. The tourists who decide and come to the site are mostly foreigners who then camp in the valley.  Wadi El Hitan lies within the Wadi El Rayan Protected area, but part of the site has been turned into a tourist venue, and there are walkways placed in between the main fossils. Small shelters were also built at the site.

In addition to its vast collection of fossilized remains, Wadi El Hitan is home to more than 15 different species of desert places and 15 different types of mammals, including the red fox and the Egyptian mongoose. The site is mostly frequented by the Gennec Foxes, who tend to visit the campsite at night searching for food.