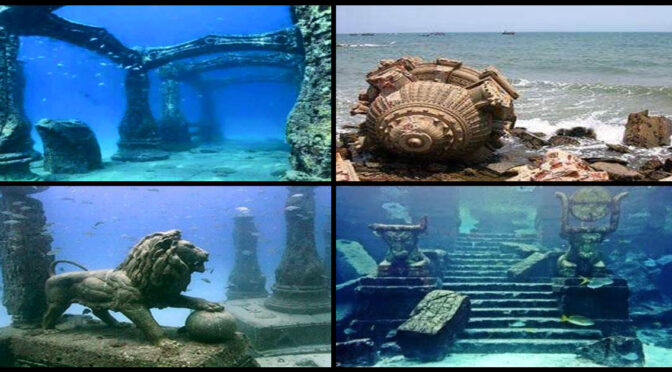 The discovery of the legendary city of Dvaraka which is said to have been founded by Sri Krishna is an important landmark in the validation of historical relevance of Mahabharata. It has set at rest the doubts expressed by historians about the historicity of Mahabharata and the very existence of Dvaraka city.

It has greatly narrowed the gap of Indian history by establishing the continuity of the Indian civilization from the Vedic age to the present day. The discovery has also shed welcome light on second urbanization in the so-called ‘Dark age’, on the resuscitation of dharma, on the resumption of maritime trade, and use of Sanskrit language and modified Indus script.

Incidentally, scientific data useful for a study of sea-level changes and effects of the marine environment on metals and wood over long periods has also been generated by underwater exploration. All this was possible because of the dedicated and daring efforts of marine archaeologists, scientists and technicians of the Marine Archaeology Centre of the National Institute of Oceanography

Dwaraka is a coastal town in Jamnagar district of Gujarat. Traditionally, modern Dwaraka is identified with Dvaraka, mentioned in the Mahabharata as Krishna’s city. Dwaraka was a port, and some scholars have identified it with the island of Barka mentioned in the Periplus of Erythrean Sea.

Ancient Dwaraka sank in the sea and hence is an important archaeological site. The first clear historical record of the lost city is dated 574 A.D. and occurs in the Palitana Plates of Samanta Simhaditya. This inscription refers to Dwaraka as the capital of the western coast of Saurashtra and still more important, states that Sri Krishna lived here.

The first archaeological excavations at Dwaraka were done by the Deccan College, Pune and the Department of Archaeology, Government of Gujarat, in 1963 under the direction of H.D. Sankalia. It revealed artefacts many centuries old.

The Marine Archaeological Unit (MAU) of the Archaeological Survey of India (ASI) conducted a second round of excavations in 1979 under the supervision of Dr S. R. Rao (one of the most respected archaeologists of India). An emeritus scientist at the marine archaeology unit of the National Institute of Oceanography, Rao has excavated a large number of Harappan sites including the port city of Lothal in Gujarat. He found distinct pottery known as lustrous red ware, which could be more than 3,000 years old. Based on the results of these excavations, the search for the sunken city in the Arabian Sea began in 1981. Scientists and archaeologists have continually worked on the site for 20 years.

The project for underwater exploration was sanctioned in 1984, directly by the then Prime Minister for three years. Excavation under the sea is a hard and strenuous task. The sea offers too much resistance. Excavation is possible only between November and February, during low tide. The sea has to be smooth and there should be bright sunshine. All these requirements effectively reduce the number of diving days to 40 to 45 in one season. In order to make the maximum use of the time available, divers use echo sounder to get a fairly accurate idea of the location and the depth of the object underwater.

The side-scan sonar offers a view of the seafloor. The sonar signals sent inside the water return the signals. Reading of the signals reveals the broad nature of the object underwater. Underwater scooters, besides the usual diving equipment like scuba, were also pressed into service. Between 1983 and 1990, S.R.Rao’s team came across discoveries that cemented the existence of a submerged city.

In January 2007, the Underwater Archaeology Wing (UAW) of the Archaeological Survey of India (ASI) began excavations at Dwaraka again. Alok Tripathi, Superintending Archaeologist, UAW, said the ancient underwater structures found in the Arabian Sea were yet to be identified. “We have to find out what they are. They are fragments. I would not like to call them a wall or a temple. They are part of some structure,” said Dr Tripathi, himself a trained diver. Dr Tripathi had said: “To study the antiquity of the site in a holistic manner, excavations are being conducted simultaneously both on land [close to the Dwarakadhish temple] and undersea so that finds from both the places can be co-related and analysed scientifically.”

The objective of the excavation was to know the antiquity of the site, based on material evidence. In the offshore excavation, the ASI’s trained underwater archaeologists and the divers of the Navy searched the sunken structural remains. The finds were studied, dated and documented. On land, the excavation was done in the forecourt of the Dwarakadhish temple. Students from Gwalior, Lucknow, Pune, Vadodara, Varanasi and Bikaner joined in to help the ASI archaeologists.

In 2001, the students of National Institute of Oceanography were commissioned by the Indian Government to do a survey on pollution in Gulf of Khambat, seven miles from the shore. During the survey, they found buildings made of stones covered in mud and sand covering five square miles. Divers have collected blocks, samples, artefacts, and coppers coins, which scientists believe is the evidence from an age that is about 3,600 years old. Some of the samples were sent to Manipur and oxford university for carbon dating, and the results created more suspicion since some of the objects were found to be 9,000 years old.

It is indeed overwhelming to find that what had been discovered underwater at the bay of Combat is an archaeological site, dating back to 7,500 BC and older than any previously claimed oldest sites of civilization.

Findings at the Dwarka excavation site

These findings suggest that Dwarka was one of the busiest port centres during the past on the west coast of India. The comparative study of surrounding sites indicates that the date of the structures of Dwarka may be between the Historical period and late medieval period. The ruins have been proclaimed the remains of the legendary lost city of Dwarka which, according to ancient Hindu texts, was the dwelling place of Krishna.

The underwater excavations revealed structures and ridge-like features. Other antiquities were also found. All the objects were photographed and documented with drawings – both underwater. While underwater cameras are used for photography, drawings are done on boards – a transparent polyester film of 75 microns fixed with a graph sheet below. The graph sheet acts as a scale.

One or two divers take the dimensions and the third draws the pictures. The Public Works Department routinely conducts dredging in these waters to keep the Gomati channel open. This throws up a lot of sediments, which settle on underwater structures. Brushes are used to clear these sediments to expose the structures.

Until recently the very existence of the city of Dwarka was a matter of legends. Now, that the remains have been discovered underwater, and with many clues seeming to suggest that this, indeed, is the legendary Dwarka, the dwelling place of Lord Krishna.