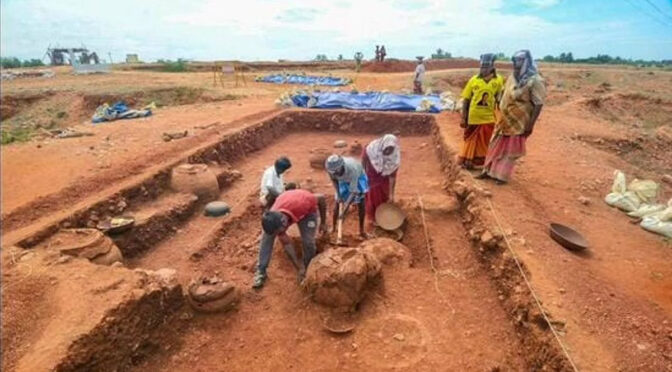 India knew to use iron 4,000 years ago, archaeological findings show

Carbon dating of cultural deposits found during archaeological excavations in Mayiladumparai in Krishnagiri district has found they belong to 2172 BCE, establishing that the Tamils were aware of the use of iron 4,200 years ago.

Tamil Nadu Chief Minister M K Stalin told the Assembly that the first phase of excavation in 2020-2021 has yielded two important dates – 1615 BCE and 2172 BCE, which provide a new understanding of the nature of cultural deposits.

The AMS dating by Beta Analytical Lab in Florida, US has established three important features – iron appeared in Tamil Nadu as early as 220 BCE, the late Neolithic phase was identified before 2200 BCE as there is a cultural deposit of 25 cm below the dated level, and black-red-redware was in use the late Neolithic phase itself, in contrast to the wider belief that they were introduced in the Iron Age.

The recent archaeological excavations in Tamil Nadu have thrown up surprises – carbon dating of artefacts in Keeladi, a Sangam Era site near Madurai, and paddy husks found in a burial urn in Sivakalai in Thoothukudi district established their age to 2,600 and 3,200 years old.

“Through the findings, it has been established that Tamils who lived 4200 years ago were aware of iron. Dense forests were converted into fertile lands only after humankind began realising the use of iron. This finding has answered questions relating to the start of agricultural activity in Tamil Nadu,” Stalin said.

He also announced that the Tamil Nadu State Department of Archaeology (TNSDA) will begin work on a comparative study of graffiti found in Keeladi and the signs of the Indus Valley Civilisation.

AMS dating of the Iron Age has so far been done in many places, including in the Gangetic plains and Karnataka, Stalin said, adding that the period that has thrown up in Mayiladumparai is the earliest so far.

“I have been saying that the goal of this government is to establish through scientific methods that the history of India should be rewritten from the Tamil land. The latest findings reinforce our thoughts,” Stalin added.

The Chief Minister also announced that the TNSDA will continue its efforts to trace the journey of ancient Tamils. As part of the efforts, excavations in Pattanam (Kerala), Thalakadu (Karnataka), Vengi (Andhra Pradesh), and Palur (Odisha) will begin this year, Stalin added.

Dr R Sivananthan, Commissioner, TNSDA, told DH that Mayiladumparai can be termed as the earliest Iron Age site in South India as Brahmagiri in Karnataka was the earliest so far with AMS dates going back to 2040 BCE.

“The date we have got for Mayiladumparai is 2172 BCE. It is just about a century and we need more evidence. The earliest evidence of the Iron Age in Tamil Nadu so far was 1500 BCE and Mayiladumparai pushes it back by another six to seven centuries. Since this is just the 1st phase in Mayiladumparai, we should wait for more cultural deposits,” he told DH.

An archaeological expert put the findings in perspective saying that the AMS dating has brought Tamil Nadu “within the Indian framework” as the cultural deposits in Mayiladumparai are 4,200 years old.

“The earliest Iron Age site in Tamil Nadu so far was 1500 BCE old while all other such sites in the country were beyond 2000 BCE. There were a lot of questions on why there was no scientific evidence on the use of iron despite it being mentioned in literature and having rich iron ore in the Salem region. With this, we now have findings,” the expert said.

The report released by the government also spoke about references in Sangam literature on iron, the use of iron, and the methods of making iron weapons. Literature refers to iron as ‘blacksmiths’ and ‘blacksmiths with strong hands’.