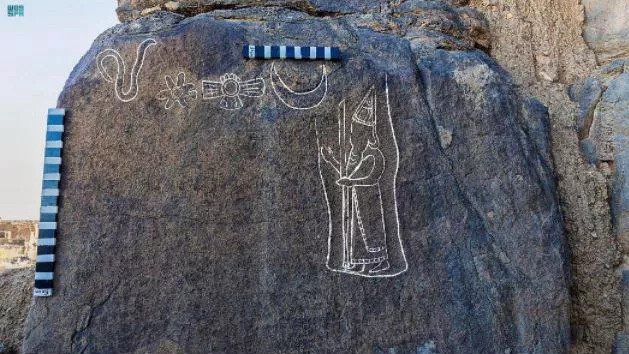 Inscription With Image of Babylonian King Found in Saudi Arabia

A 2,550-year-old inscription, written in the name of Nabonidus, the last king of Babylon, has been discovered carved on basalt stone in northern Saudi Arabia, the Saudi Commission for Tourism and National Heritage recently announced.

An engraving at the top of the inscription shows King Nabonidus holding a scepter alongside four other images that include a snake, a flower and a depiction of the moon, the commission said in a statement, noting that these symbols likely have a religious meaning.

These engravings are followed beneath by about 26 lines of cuneiform text that experts with the commission are currently deciphering. This is the longest cuneiform inscription ever found in Saudi Arabia, the commission said in the statement.

The inscription was found in Al Hait in the Hail Region of northern Saudi Arabia. Known as Fadak in ancient times, Al Hait holds numerous ancient sites, including the remains of fortresses, rock art and water installations, the commission said. “[It] has great historical significance from the first millennium [B.C.] until the early Islamic era.”

It remains to be seen what new information this inscription will provide on King Nabonidus (reign 555–539 B.C.).

Why Nabonidus chose to live in what is now Saudi Arabia for an extended period of time is a matter of debate among historians, with some experts saying that conflicts between Nabonidus and Babylon’s priests and officials are a likely reason.

At the end of Nabonidus’ reign, the Babylonian Empire came under attack by the Persian Empire, which was led by King Cyrus the Great;

Babylon itself was captured by the Persians in 539 B.C. and the Babylonian empire collapsed. The fate of Nabonidus after the collapse is unclear.