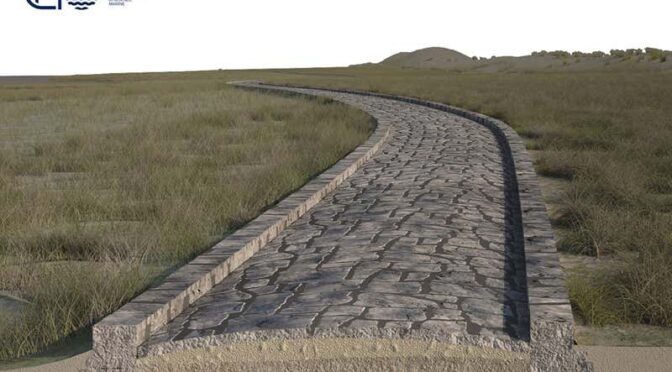 Ancient Roman Road Discovered at the Bottom of Venice Lagoon

In the Venice lagoon, an ancient and now submerged road was unearthed in a location that would have been accessible by land 2,000 years ago during the Roman era.

Fantina Madricardo at the Marine Science Institute in Venice and her colleagues made the discovery after mapping the floor of an area of the lagoon called the Treporti channel.

“We believe it was part of the network of Roman roads in the northeast of the Venice area,” says Madricardo.

In the 1980s, the archaeologist Ernesto Canal proposed that there are ancient human-made structures submerged in the Venice lagoon.

This suggestion prompted decades of debate, but couldn’t be confirmed until now as the previously available technology was insufficiently advanced to explore such a challenging environment.

“The area is very difficult to investigate by divers because there are strong currents and the water in the Venice lagoon is very turbid,” says Madricardo.

The team used a multibeam echosounder mounted on a boat to form a picture of what lies underwater. This device sends out acoustic waves that bounce off the lagoon floor, allowing the team to reconstruct images of whatever structures are down there.

The researchers found 12 structures up to 2.7 metres tall and 52.7 metres long that extended along 1140 metres in a southwest to the north-eastern direction in the configuration of a road.

The presence and layout of these structures suggest that there may have been a settlement in the area.

It was then submerged about 2000 years ago – partly due to human activity that diverted the flow of rivers and starved the area of the sediment that was needed to keep it above water.

“Presumably, the road is giving access to this rich environment.

The margins of the land and the water are full of resources that people might have been exploiting,” says James Gerrard at Newcastle University in the UK. “It’s not normal to find, if you like, ‘drowned’ landscapes or be able to study them in this kind of detail.”