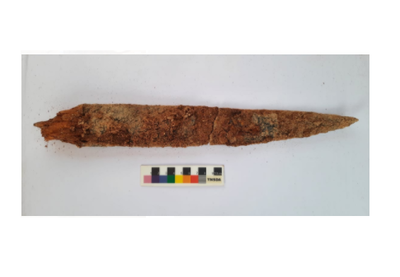 An iron dagger with a wooden handle was found inside a burial urn unearthed at Konthagai village, which is part of the Keeladi cluster where the seventh phase of excavation is in full swing to establish the existence of urban civilisation in the Sangam era.

The second season of digging started in February at Konthagai where 25 burial urns have been unearthed so far and 11 of them have been opened, according to R. Kaviya, one of the four Site Archaeology Officers.

These urns measure 95 to 105 cm in height with a circumference of 80 cm. Some of the urns contained iron weapons, shaped like knives, and spears and small terracotta vessels.

The latest, a 40-cm-long iron dagger with a 6-cm-long wooden handle was found at a depth of 77 cm. The urn filled with soil sediment had the five-cm-thick dagger, associated with femur bones, a skull and an offering pot.

It is a type used by warriors belonging to the Sangam period, contemporary to Keeladi dating, according to R. Sivanandam, Director of Keeladi Excavations.

This was the first time that they had stumbled upon a weapon with a wooden handle, and it would be very useful for exact dating of the evidence found so far, he said.

Though extremely fragile, the wooden handle was preserved in rare natural phenomena and collected carefully in foil covers. The sample would be sent to Beta Analytical Lab, Florida, the USA, for an exact dating, added Mr. Sivanandam, who is also the Commissioner (FAC), Department of Archaeology.

The skeleton samples were handed over to experts at Madurai Kamaraj University, where a DNA testing laboratory is coming up.

Ms. Kaviya said the urn was found with a disturbed lid. The broken portion of the lid was retrieved inside the urn at a depth of 80 cm.

There was a possibility that the broken portion of the urn lid fell on the iron dagger, as two urn lid pieces were found on either side of the dagger, which was also damaged.

The Keeladi excavations are being carried out by the Archaeological Survey of India under the supervision of Minister for Industries Thangam Thennarasu and B. Chandramohan, Principal Secretary, Tourism, Culture & Religious Endowments Department.