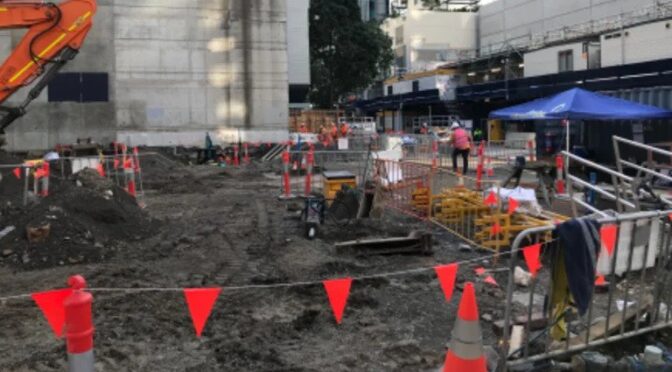 QUEENSLAND, AUSTRALIA – The Archeology org document in Brisbane, a town located on the East Coast of Australia, that more than 200 objects from the end of the 19th century, including tobacco and opium pipes, bottles, crockery, books, and animal bones, have been unearthed in Brisbane.

The Niché Environment and Heritage archeologist Kevin Rains believed that the site was the original Chinatown area in the town and that artifacts belonged to the people who went there at the end of the 1880s gold rush and founded a working-class community called Frog’s Hollow.

Frog’s Hollow was the boggy, low-lying area that ran from the bottom of Albert Street near the Botanic Gardens towards Elizabeth Street and stretching two or three blocks either side of Albert Street.

“Queensland was a later colony. There was a lot of diversity and development and a lot of ‘get up and go’,” he said.

“There was a lot of wealth even in those early days. People were already building up strong businesses.”

“It is equivalent to the Rocks area of Sydney or Little Lonsdale street in Melbourne,” he said.

“It was a working-class area, but also highly multicultural, with people of British and European backgrounds but also Chinese, South Sea Islanders and people from other parts of Asia living there as well.

“It had food shops, opium dens, hotels, lots of boarding houses, and a mix of grocers, all sorts of things.

“We have found evidence of a saddlery – Robert Schute’s Saddlery – and a leather shoemaker.” Large numbers of Chinese, who came to Queensland for the gold at Gympie, eventually returned to Brisbane.

“In Queensland the gold rushes began to peter out around the 1880s and there was legislation keeping them from prospecting and working on the gold fields, so a lot of them moved into Brisbane and began setting up business there,” Dr Rains said.

One foundation wall unearthed by the excavation crew working on Albert Street comes from the Gympie Hotel, which later became Brannelly’s Oriental Hotel in 1885.

“We found old walls on both sides of the [Albert] street,” Dr Rains said.

“We found some of the foundations of the original Gympie Hotel on the left-hand side and we’ve also found wall and floors from the old saddlery and the Nine Holes shops on the other side.

“Nine Holes was was row of shops on the north side of Albert Street where the [Cross River Rail] station is being built today and Brannelly’s Colonial Hotel was on the other side, the southern side.” The Frog’s Hollow excavation work was completed in January 2020.

“A bit after that we did all the analysis of all the actual artefacts and I’m in the process now of writing up the report for the state government,” Dr Rains said. Dr Rains said archaeologists very much hoped to find parts of early Brisbane as the excavation work for Cross River Rail.

“But we were not sure. We knew some of the buildings that were built along Albert Street in the 1920s, now demolished, had fairly shallow foundations, so there was a lot of potential for a lot of earlier material to be underneath it,” he said.

“The big surprise was Brannelly’s Oriental Hotel because they built a 1970s building – which they demolished in the 1980s – over the top of it.

“It was built on the same spot as the Gympie Hotel – corner of Albert and Mary streets – and it [the Gympie Hotel] got redeveloped in 1885 as Branelly’s Oriental Hotel.

“It was built from stone and brick. But in the 1980s it got demolished and a 1980s-style corporate tower got built there.

“Its a bit of a shame. The photos show it had lovely iron lacework that there was during those times. It was like the Bellevue Hotel, the same period.

“So while we didn’t think we would find a lot because the big corporate towers were built, we did find a lot of the foundations, which was very good.”