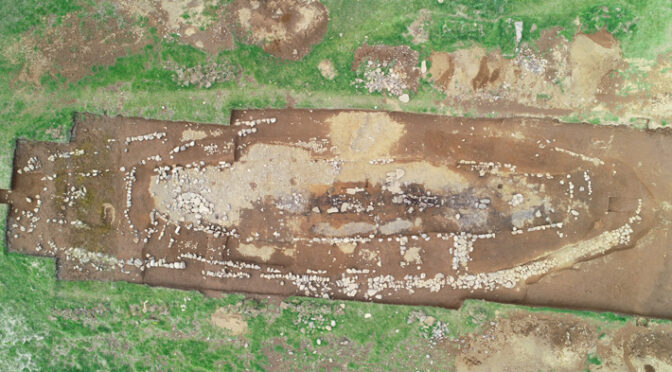 It is thought that the ancient longhouse was built in the 800s, decades before seafaring refugees had settled the island and was hidden beneath a younger longhouse,  brimming with treasures, said archaeologist Bjarni Einarsson, who led the excavations.

“So far the richest is the youngest hall in Iceland,” Einarsson told BBC. “It is impossible not to conclude that it is a chieftain’s house.”

The massive buildings, up to 75 meters long and 20 feet (6 meters) tall, lined with turf and thatch and were used as communal habitations throughout the Norse lands during the Viking Age.

They were divided into rooms and could be shared by several families. Fires were built in stone hearths along the center, and farm animals could be stabled there to protect them from cold.

Both longhouses were found at Stöð, near the village and fjord of Stöðvarfjörður in the east of Iceland. The younger structure dates to around A.D. 874 — the commonly accepted date for Iceland’s settlement by people, who, according to Icelandic lore, were escaping the Norwegian king Harald Fairhair. It contains one of the most valuable hoards of ornamental beads, silver and ancient coins ever found in Scandinavia, Einarsson said.

Among the finds: Roman and Middle Eastern silver coins, and “hacksilver,” which are cut and bent pieces of silver used as bullion or currency by the Vikings and other ancient peoples.

The excavations of the 130 foot-long (40 m) hall have also unearthed decorative glass beads, rings, weights, and a tiny fragment of gold, Einarsson said.

The inhabitants likely acquired these goods by trading local resources, such as the skins and meat from whales and seals, which were prized throughout Viking Scandinavia.

Hidden beneath the treasure-filled longhouse was an even older structure. Chemical and other analyses suggest this buried longhouse was built in the 800s, long before the permanent settlement of Iceland, Einarsson said.

He thinks it was a seasonal settlement or camp, occupied only during the summer and maybe into the fall, by workers in the area.

Although walruses were not found in eastern Iceland, the local resources that could be eaten, preserved, or traded could have included produce from fish, whales, seals, and birds, he said.

The archaeologists have also found artifacts from the everyday life of the settlement, including several spindle whorls made of local sandstone that was used for spinning fibers into thread or twine.

Parts of the older building investigated so far show it was one of the largest longhouses ever found in Iceland.

“We know that the westernmost part of the older hall was a smithy [for working with metal] — the only smithy within a hall known in Iceland,” Einarsson said.

The seasonal camp at Stöð was similar in scale and function to the Viking settlement discovered at L’Anse aux Meadows, in what is now Newfoundland in Canada, which has been dated to around A.D. 1000, he said.

“This was a pattern of the settlement of the islands in the Atlantic Ocean,” Einarsson said. “First, we had the seasonal camps, and then the settlement followed.”

Einarsson has directed a private archaeological firm for more than 20 years, and from 2009 excavated a Viking Age settlement at Vogur, on Iceland’s west coast, which depended on hunting walruses for their ivory, skins, and meat.

He discovered the longhouse ruins at Stöð in 2007 and began excavations at the site in 2015. The project is paid for by Iceland’s Archaeological Fund, the region’s municipal government, companies, and local people.