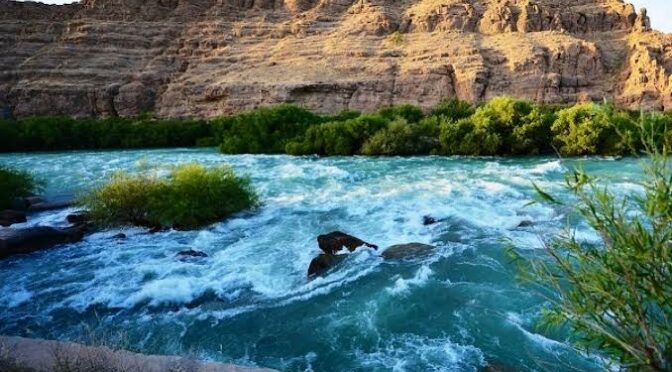 A recent study has shown that it is the Ghaggar River that was later identified as the legendary Saraswati with the “clear evidence” that the early Harappans built their settlements.

It has been repeated several times since the 19th Century that a modern Ghaggar-Hakra river system, which runs intermittently between Indian and Pakistan, could be the Saraswati river described in the Rig Veda.

However, with no proof of the river’s uninterrupted flow during the zenith of civilization, it has been argued that the Harappans depended on monsoonal rains.

In the study, published in the journal ‘Scientific Reports’ on November 20, scientists from the Physical Research Laboratory at Ahmedabad and the Department of Earth Sciences, IIT Bombay presented what they called was “unequivocal evidence for the Ghaggar’s perennial past by studying temporal changes of sediment provenance along a 300 km stretch of the river basin”. ‘

They argued that “this revived perennial condition of the Ghaggar, which can be correlated with the Saraswati, likely facilitated the development of the early Harappan settlements along its banks.”

The study argues that “Harappans built their early settlements along with a stronger phase of the river Ghaggar”, during a period 9,000 to 4,500 years ago, “which would later be known as the Saraswati”, but “by the time the civilization matured, the river had already lost its glacial connection.”

The study notes that while the eventual “decline” of the “civilization” at the Ghaggar-Saraswati valley postdates “the exceptional changes to the flow of the river”, “a stronger perennial phase appears to have helped the early societies sow the seeds of the earliest known civilization of the Indian subcontinent.”

The presence of a large number of Harappan settlements along the banks of the modern-day Ghaggar Hakra stream, which had remained monsoon-fed for most of its history, has baffled archaeologists since the 1950s.

The authors noted that the observation that “Harappans in the Ghaggar valley made little effort to harvest rainwater, unlike their counterparts in the semi-arid Saurashtra and Rann of Kachchh regions” in spite of a weakening monsoon raised “serious doubt about the conclusion that the Ghaggar had a seasonal water supply.”

The researchers noted that two of its largest cities, Mohenjo-Daro and Harappa, along with smaller settlements were built along “mighty and frequently flooding Indus and Ravi, respectively.”

In spite of evidence of an increase in localized rainfall for a few centuries, during the urbanization of the period, the study notes, “The important question that needs to be asked is: what made the early settlers build their cities along a supposedly dying river instead of the well-watered plains of neighboring perennial Himalayan rivers.”

The researchers studied the temporal changes in the origin of the sediment along the 300 kilometer stretch of the river basin and established that 80,000 to 20,000 years ago, the river was receiving sediments from the Higher Himalayas and 9,000 to 4,500 years ago, from the Lesser Himalayas.

“The latter phase can be attributed to the reactivation of the river by the distributaries of the Sutlej,” it added.

The study scrutinized the dynamics of the Harappan civilization and found that “timing of the rejuvenated perennial phase of the Ghaggar”, which was between 9,000 to 4,500 years ago, “coincides with that of the flourishing of the Pre-Harappan and Early Harappan cultures along its banks.”

“Towards the end of the Mature Harappan phase (4.6-3.9 ka), there is a clear evidence of human migrations to the lower and upper reaches of the river, leaving the middle part sparsely populated…which could be attributed to the disorganization of the river as established in this work,” it said while adding that the lower reaches of the river “possibly remained perennial, through a connection from the Sutlej, supporting mature and post-urban Harappan settlements.”