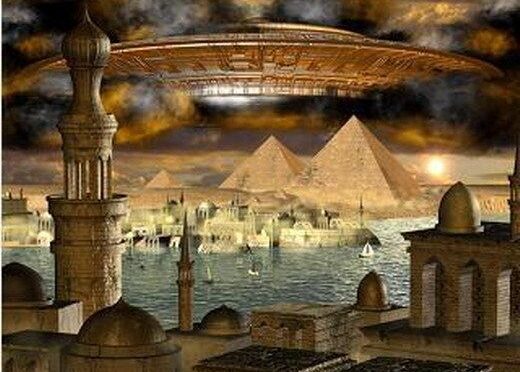 The Kaibab Plateau located in central Northern Arizona showcases a mysterious majestic city epic in size and proportion. While this city is officially referred to as a series of natural “Grand Canyon Monuments”, they are in fact precisely arranged pyramids towers and temples aligned to both the star and nebula pattern of ORION “The Hunter” and Pleiades constellations.

This appears to be a great city of a “lost” continent hidden in plain sight. There is neither folklore nor definition of it, although, Egyptian and Asian artifacts have been found.

Some of which swiped under the guidance of the Smithsonian Institute. If giant Nephilim skeletons were recovered, only the inner circles of the secret societies would know. The city is veiled in secrecy using deceptive language and tactics as a device for keeping the general population from understanding what the “Monuments of the Grand Canyon” truly are.

The Monuments embedded within this great chasm is now confirmed to be a set of pyramids and structures defining a city of such enormous expanse that it very well could have been the metropolis of a lost continent populated with an antediluvian civilization. The antediluvian period begins with the Creation according to Genesis and ends with the destruction of all life on the earth except those saved with Noah in the Ark, and possibly disguised by the knowledge of the secret societies.

This city is a remnant of an ancient continent. It remains a mystery, however, the notion that it may even be infamous and highly sought after the lost continent of Atlantis is certainly plausible, it most likely is a companion pyramid array not unlike what would be found at the 19th leyline node, Atlantis, or the first node where the great pyramid Khufu stands exactly in the centre of the earth plane.

The hypothetical “Lost land” known as Lemuria might be considered by some, however, the legend and theories regarding Lemuria are more rooted in fictional hearsay than would lend more research for revival here with the identifying location as a reasonable manner the city within the canyon. The opposite may be true as further research takes place in which more may be revealed.

In the case of the sunken continent of Atlantis, it has always been thought of as an entire parcel of land surrounded by the waters of the Atlantic Ocean. The world-renowned cosmic channel, Edgar Cayce, verifies this although sceptics and others have postulated otherwise.

One professor, the late professor Arysio Nunes dos Santos, suggests Atlantis is in the location of the newly discovered pyramids found on West Java, Indonesia. Other volumes of published materials produce mostly conjecture, however, without an honest look at real evidence. They are valiant efforts.

The likely truth is that a world flood did occur covering much of the topography of the land and seas in which when had mostly receded, Atlantis remained submerged and not sunken at all.  Or, the waters that were added to the downpour of the waters from above creating the destructive force killing all life and devastating all constructs on the surface created a ‘sinkhole’ effect in which the mythical place we call Atlantis did actually sink.

There is a proof now that pyramids do exist in the Southwest United States. They do reside under an ancient seabed which establishes that they are all coordinated and line up precisely with the major stars and nebulae of the constellation Orion “The Hunter”. The same has been established with the great pyramids of Giza in Egypt. The difference is that all of the stars and nebulae of Orion match with the canyon Monuments with clarity.

The Grand Canyon with all its pristine beauty is neither naturally formed or organic in nature. This unique area at the Kaibab Plateau is indeed a widespread chasm that could not have possibly been carved out by a tumultuous river which is narrow by comparison. A simple observation of the angularity about the Monuments shows that they are devoid of sweeping curves on the stones. This logically demonstrates that water did not spend enough time sculpting smooth forms.

Is the historic record genuine?

If geologists, archaeologists, scientists of all areas agree that the mighty Colorado River in it’s strange but rather small in scale and configuration could form this canyon, then perhaps our geological historians are accurate. I agree that a river or series of them did cut vast areas of earth from the South to North rim and then on over to Nevada and down. I’ll buy the argument that simply because these are ancient structures built of hardened earth and that the soft was swept away over millions of years and so on has to be that simply because I’m showing proof these are aligned to stars.

I would have to also think that if we washed away all of the soft earth over the entire continent that we’d find the whole of our astrological system in the form of intelligently crafted pointed buildings. After all, what else other than a globe besieged by water could bury so many archaeological finds throughout the world? I do not believe that over time earthly renovations due to tropical storms, even hurricanes, tsunamis, and volcanic activity could have buried modern in ancient times cities.

There is evidence that mighty pointed formations are found in other canyons. And, they are also stepped and blocked. Blocks are angled at 90 degrees and these angles are seen in the Grand Canyon almost every yard of the way. This means that rivers did etch away doing its beautiful carving of the Great Deluge sediment from the original engineering constructs.

If this is absurd, then there’s room to suggest that there may have been an alien intentioned agenda at large. Perhaps there were massive ore harvesting projects aimed at stealing enormous caches of treasure, in particular, GOLD. A mining project as large as Massachusetts perhaps.

If the historical record is wrong that a river the width of the Colorado River could have snaked its way completely and everywhere around these monumental features, then there must be an explanation as to how this massive ditch be created. The river could have been wider or several as opposed to the single one we know today, however, if there is an explanation, it would have to be alien inspired.

This great gorge may actually be an ancient geoforming project on the largest of scales known on planet Earth. The intent, obviously Alien, was to remove the softer ancient seabed sediment and earth that had engulfed the city. This occurred most likely during the flooding of the planet as told in Biblical terms regarding Noah and the story of the Ark.

This city then became an unearthed treasure trove find by off-world interests. Perhaps those who competed, or even battled against the Anunnaki of Nibiru (Planet X). Their goal perhaps for conquest over the megalithic cache of gold – primarily – that to a person living today be incomprehensibly vast. For you see, the Monuments of the Grand Canyon may have been completely covered – layered – in gold. The temples were filled as well as ordained with silver, gold and platinum. Aluminium was also a valuable metal. This city could very well have had the appearance of a scaled-up, way up, version of the most ornate crown of jewellery.

Why was this alien archaeological dig conducted?

To plunder and harvest gold of coarse. A project of this size had to have been to liberate the treasure from a whole city the size of, well, the Grand Canyon. Alien ‘Pirates’! Once the city was revealed, some incredible technology had to have been implemented to strip the precious metals from the massive Monuments. Perhaps a complex smelting process was used. The gold then off-loaded to other locations on Earth or off-world. Hollywood, as always, gives us a “tell” in an alien-related film in which an unusual method is shown how an alien intelligence extracts gold from the earth. This is relevant for the reason it is taking place in Arizona, the location of the mining, or excavation, is in a canyon, and that it is being conducted by aliens. Furthermore, a war is taking place all because of gold.