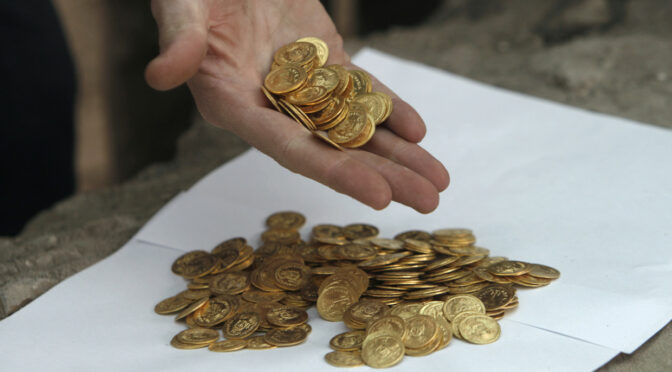 A fortunate man has made an amazing discovery in India. He recently won large sums of money in a local lottery, and decided to buy property from his windfall – and discovered buried treasure on this plot

The lucky person found a hoard of coins over a century on the surface.

Mr. B Rathnakaran Pillai (66), is a former saw-mill worker and was an active member of his ward in the town of Kilanoor, in Kerala in south-west India. Last Christmas he had a stroke of great luck when he won Rs 6 crore ($842,000) in a local lottery.

According to The News Minute, Mr. Pillai ‘had always prided himself on his green thumb and decided to use a part of his lottery wins to buy land to grow vegetables’. He bought a small plot of land a few miles from his home.

This land is near an old temple dedicated to the Hindu god Krishna. One day while Mr. Pillai was digging in the soil in order to plant some tapioca, his spade struck something hard.

He removed some topsoil and unearthed a pot. The News Minute quotes Pillai as stating that “I pulled out an earthen pot. Inside this were thousands of copper coins .” After this spate of good luck, no one would blame him for wanting to put it to the test even further on something like an online casino game – click here to learn about such games.

The gardener examined the hoard he had found and discovered he had an amazing amount of coins. In total, the hoard weighed over 40 pounds (18.14 kg).

Mr. Pillai knew he had found something very important and immediately alerted the relevant authorities, which is required by law. The local authorities now have possession of the coins.

Over 2500 coins were found and they were identified as coming from ‘the defunct kingdom of Travancore, which ruled Kerala for hundreds of years,’ according to BBC News.

The coins date from the reign of two Maharajahs of Travancore. One was Sree Mulam Thirunal, (1885 and 1924) and the other Sree Chithira Thirunal Bala Rama Varma (1924-1949), who was the last ruler of Travancore. These Maharajahs ruled their territory as quasi-independent rulers but were under the influence of the British prior to Indian independence.

Before the first independent Indian government introduced the modern currency system, the rulers of Travancore had a monetary system known as Fanam, which had been in use for centuries. In the local Malayalam language, this word means ‘wealth’ or ‘money.’

The copper coins are known as chuckrams and four types of them were identified. Further examination showed that some silver and gold coins in both low and high denominations were also in the pot.

The container that held the coins had the traditional symbol of Travancore, a conch shell on one side and the image of the last Maharajah on the other side.

It is believed that the coins date to the late 19th century. This naturally led to the question as to why so many valuable coins were buried in the earth and left there for over a century. It is possible that they were owned by a local healer whose house once stood in the area where the coins were found.

The healer could have buried the treasure in his home. Mr. Pillai told The News Minute that “we unearthed the pot from the room which is the Kanni Moola (southwest corner) of the healer’s house.”

The south-west corner of a dwelling is considered sacred in Hindu architecture. The healer may have placed his wealth in the sacred area of his home to keep it safe.

At present, the coins are at the Conservation Laboratory in Thiruvananthapuram. Many of the “the coins have oxidized and the copper oxide which looks green is stuck to the surface” and needs to be removed, according to Rajesh Kumar R, of the local Archaeology Department. Once cleaned the coins are going to be valued by a committee of experts.

Mr. Pillai is not entitled to the coins and he is simply happy to have found the buried treasure. However, it is expected that the lucky man will be rewarded for his find by the local government and will most likely receive a portion of the total value of the coins.