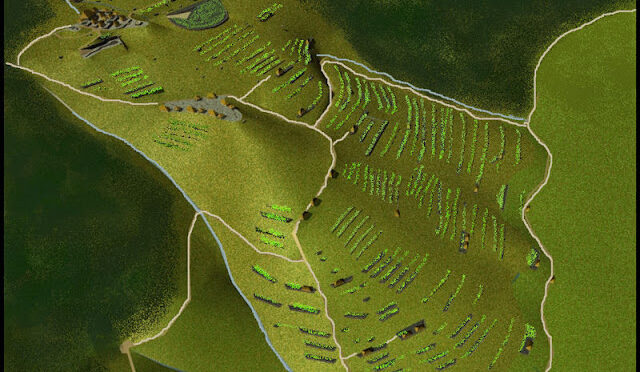 The Mayans built astonishing temples in Mexico, Guatemala, and Honduras – but now some believe the ancient peoples fled their dissolving civilization and ended up in Georgia.

His astonishing theory is based on the discovery of 300 to 500 rock terraces and mounds on the side of Brasstown Bald mountain that date to 900AD – around the time the Mayans began to die out.

Mr. Thornton’s blockbuster theory revolves around the area near Brasstown Bald potentially being the ‘fabled city of Yupaha, which Spanish explorer Hernando de Soto failed to find in 1540’.

He described it as ‘certainly one of the most important archaeological discoveries in recent times’.

The Mayans died out around 900AD for reasons still debated by scholars – although drought, overpopulation, and war are the most popular theories, reported the Atlanta Journal-Constitution.

The remains were first found by retired engineer Carey Waldrip when he went walking in the area in the 1990s. Archaeologist Johannes Loubser excavated part of the site and wrote a report about it in 2010, but does not believe the rock terraces are Mayan.

‘I think that (Mr. Thornton) selectively presents the evidence,’ Mr. Loubser told the Atlanta Journal-Constitution. ‘But he’s a better marketer than I and other archaeologists are.’

Mr. Loubser, who excavated a rock wall and small mound, added that claims like this must be backed up with ‘hard evidence’ because of the various conflicting opinions in the archaeological world.’

Mr. Loubser believes the structures could have been built by the Cherokee Indians or an earlier tribe between 800AD and 1100AD.

He stopped digging because he realized the site could be a grave. Still, Mr. Thornton claims early maps of the location named two villages ‘Itsate’, which was how Itza Mayans described themselves.

The terrace structures and date helped him reach his conclusion. It was commonplace for the Itza Maya to sculpt a hill into a pentagonal mound,’ he argues. ‘There are dozens of such structures in Central America.’

But not everyone is impressed by Mr. Thornton’s theory. He cited the University of Georgia archaeology professor Mark Williams in an article on Examiner.com.

‘I am the archaeologist Mark Williams mentioned in this article,’ Professor Williams said on Facebook. ‘This is total and complete bunk. There is no evidence of Maya in Georgia. Move along now.’

‘The sites are certainly those of Native Americans of prehistoric Georgia,’ Professor Williams told ABC News. ‘Wild theories are not new, but the web simply spreads them faster than ever.’

Mr. Thornton wasn’t bothered by the ensuing debate, in fact, that’s exactly what he wanted.

‘I’m not an archaeologist. I’m a big picture man,’ said Mr. Thorton to the Atlanta Journal-Constitution.

‘We’re hoping this article stirs up some interest. I was just trying to get the archaeologists to work some more on the site and they come back snapping like mad dogs.’

He works with a company called History Revealed Media that helps create three-dimensional maps of excavated sites and said that when he compared his map of the Georgia site, it reminded him of other Mayan works.

‘It’s identical to sites in Belize,’ he argued.

The Mayans have been under intense scrutiny over the past few years as rumors abound about their mysterious 5,132-year calendar allegedly predicting the apocalypse on December 21, 2019.

But various experts have spoken out against Doomsday, including Mexico’s ‘Grand Warlock’ Antonio Vazquez, to say that the Mayan calendar instead will just reset and a new time-span will begin.