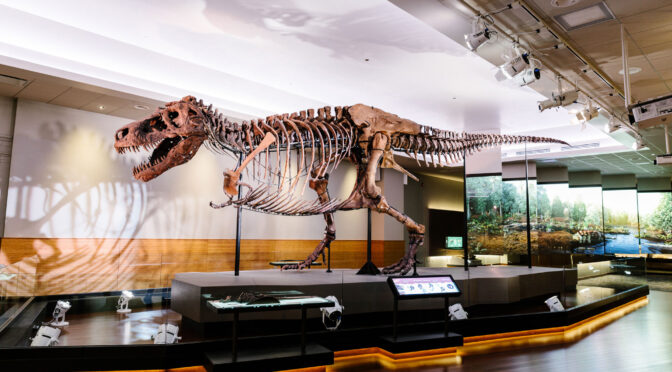 Meet Sue One of the Largest, Most Extensive, and Best Preserved Tyrannosaurus rex specimen

Sue, the world’s largest, most accurate, and best-preserved T. rex, has attracted millions of visitors to Chicago’s Field Museum.

Many of Sue’s bones have never been found in a T. rex before. Sue’s skeleton, which is 90 percent intact, also gives scientists the rare ability to recreate what T. rex would have felt like and how it moved while it was alive.

Finding most of the bones from a single specimen gave scientists excellent detailed information about Sue’s anatomy and biology.
T. rex is known for its tiny forelimbs, and Sue’s right arm is only the second nearly complete arm ever found.

It will help scientists better understand the strength and motion of this oddly small appendage. Sue’s arms are about the same size as human arms, making them too short to reach her mouth.

Yet the bones are quite thick which indicates they would have been very powerful. Current thinking is that the arms were more useful to T. rex in its early life when it would have been proportionately larger.

If you do visit Sue at the Field Museum, you won’t see all of her bones attached. For example, there are long thin bones that were formed just beneath Sue’s skin on her belly called gastralia. They are different from her ribs and scientists are trying to figure out their positioning and how they should be attached.

They might have helped her breathe or perhaps they helped protect her internal organs. Usually, these delicate bones are incomplete or missing, but Sue has about 75% of her gastralia intact.

Sue’s has a wishbone or furcula in her chest. This bone is the first ever found on a T. rex. Only carnivorous dinosaurs have a furcula and it’s one of the many links between dinosaurs and birds.

Its structure and arrangement provide some of the best clues about how Sue lived and related to her environment.

Before being put on display, Sue’s skull spent 500 hours inside a powerful CT scanner. As a result, scientists can now learn about the structure of T. rex’s brain.

These CT images show Sue’s brain cavity. The brain itself was about the size and shape of a big sweet potato. Sue had large olfactory bulbs and sinus cavities indicating she had a strong sense of smell which would have been important for hunting or scavenging for food.