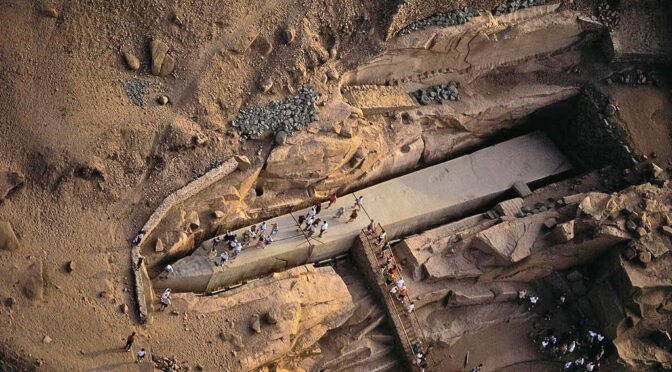 Mysteries Of Ancient Egypt: The Unfinished Obelisk Of Aswan

Abandoned thousands of years ago in the quarries of northern Aswan, ancient Egypt, the Unfinished Obelisk are a mass of granite 40 meters long (138 feet) and more than 1,090 tons (1,200 short tons) that makes up one of the most important mysteries of the archaeological world.

The creation of the obelisk was ordered by Hatshepsut (1508–1458 BC), the fifth pharaoh of the Eighteenth Dynasty of Egypt. The history of its origin is uncertain, but it is believed that the obelisk started to be built, possibly, to complement what would later be known as the Lateran Obelisk – originally built in Karnak and later sent to the Lateran Palace in Rome.

One of the biggest factors that puzzle scholars are the fact that the unfinished obelisk is a third larger than other ancient Egyptian obelisks erected throughout history.

It is estimated that it could measure more than 40 meters (138 feet) and weigh around 1,090 tons (1,200 short tons), if completed – to better understand, imagine the weight of 200 African elephants.

It is believed that the creators of the obelisk started to excavate it directly from a rock, but during the process, they noticed cracks under the granite.

This fact would have been the main reason that led them to abandon the project, however, the lower side of the obelisk remains, even today, fixed to the rock.

Although this project has not been completed, from an archaeological and historical point of view, this obelisk is important for understanding the ancient Egyptian techniques used in stonework.

During the investigations, researchers discovered marks on the workers’ tools, which even after hundreds of years, remain preserved. In addition, they found lines of ocher colours marking the location of the workers.

Another surprising discovery was made in 2005 in the Aswan quarries. At the time, the researchers found an unfinished and partially worked obelisk base.

In addition, they found sculptures made of stones that may be linked to the place of origin from which other obelisks were created.

Currently, all of these discoveries are on display in an open-air museum, managed by the Egyptian government, which is considered an archaeological and heritage site.

A sea of ​​unknowns

Obelisks created by the ancient Egyptians are a great topic of debate because they raise numerous questions that we are still unable to answer to this day.

How did they carve them into a single block? How have they transported hundreds of miles away? How did they lift the huge, heavy columns?

There are numerous theories that indicate that the obelisks were transported by boats on the Nile River, although it is difficult to explain how the granite masses moved to the boats, or how the boats supported such a weight.

Carving the monuments directly into the bedrock was a common technique, and masons used stone balls to remove any imperfections until the surface was smooth.

There are still samples of these Dolerite balls in Aswan that were harder than granite and did not crack or break after repeatedly hitting the surface of the granite.