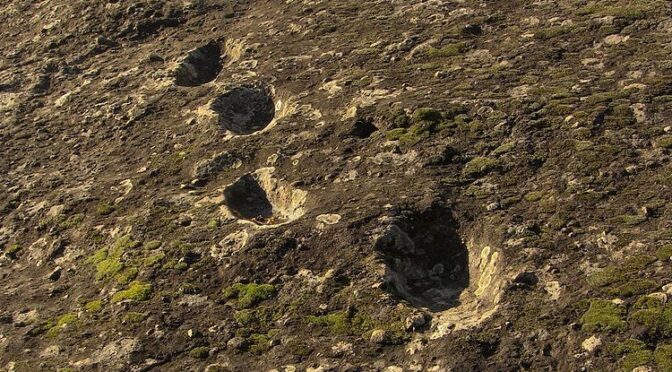 According to legend, the devil once took a walk down the side of a volcano in southern Italy, each step preserved forever in solid rock. The tracks are known as the “Ciampate del Diavolo“‘ or “Devil’s Trail” – but details published in 2020 reveal a less diabolical yet far more interesting story on how they came to be.

The mysterious footprints are well known to those living near Roccamonfina, an extinct volcano in southern Italy that hasn’t erupted in tens of thousands of years. Since 2001, researchers have sought to explain the dozens of impressions left by a small group of human ancestors and even a few animals snaking their way down the mountainside.

But a paper published in January 2020 suggested some individuals were actually heading back up. Over recent years numerous expeditions have provided detailed measurements on a total of 67 indentations left by the scuffle of feet, hands, and legs, all divided across three distinct tracks headed away from the mountain’s summit.

Thanks to the contributions by a team of scientists from institutes across Italy, we obtained details on a further 14 prints – these even larger than the others – some of which head up the mountain rather than down.

Radiometric and geological dating of the various rock strata has already established that the imprints were cast in the soft blanket of ash left in the wake of an eruption around 350,000 years ago, making them some of the oldest preserved human footprints on record.

But just who left these tracks? It’s impossible to say for certain based on an assortment of dull shapes pressed awkwardly in time-worn volcanic sediment.

There seemed to be at least five different bodies behind the marks. Further investigations could help whittle down ideas on the sex, body mass, and perhaps even heights of the trekkers.

Given our own Homo sapiens ancestors developed their characteristic traits only 315,000 years ago, we can be pretty confident they weren’t members of our own species.

But the researchers have some clues.

One of the clearer imprints provides clear evidence of a grown human male.

And the shapes of many of the footprints point to an interesting possibility. The broad nature of the hindfoot area, with the low rise of the arch, looks suspiciously like the feet of individuals buried in the Sima de Los Huesos “Pit of Bones”.

The owners of those 430,000-year-old remains have been a topic of debate of the years, progressing from Homo heidelbergensis to Neanderthal, to Denisovan, back to Neanderthal.

Assuming they truly are Neanderthals, it’s reasonable – even if not solid – to bet that the footprints were left by a gang of young Neanderthal adults.

Still, the researchers were careful about jumping to conclusions.

“We have decided to keep the attribution to a specific species still pending,” lead researcher Adolfo Panarello told New Scientist’s Michael Marshall back in January 2020.

Just what inspired an ancient group of hominids to go trouncing through the cooling soot and debris after the mountain violently blew its lid is anybody’s guess, though it’s clear from the impressions that nobody was in a hurry.

Based on the leisurely pace of around 1 meter per second (3.2 feet per second), the handful of footsteps heading uphill, and a scattering of basalt artefacts found in the vicinity, we might imagine this was just another day in the life by an active volcano.

Slowly treading barefoot through material freshly deposited by a 300 degree Celsius (572 Fahrenheit) flow of billowing pyroclastic insanity isn’t exactly for the faint-hearted either, no matter how tough your soles might be.

Going on a back-of-the-envelope calculation, the researchers estimated the blanket would need to have cooled to at least 50 degrees Celsius (122 Fahrenheit), meaning at least several hours needed to have passed between an eruption and the trek.

We might well imagine members of a community living in the shadow of a mountain known to occasionally spew out hot clouds of poisonous gas and muddy ash, with a small band setting across a familiar path to check out the carnage.

Perhaps disaster tourism isn’t a recent thing, after all.

This research was published in the Journal of Quaternary Science.