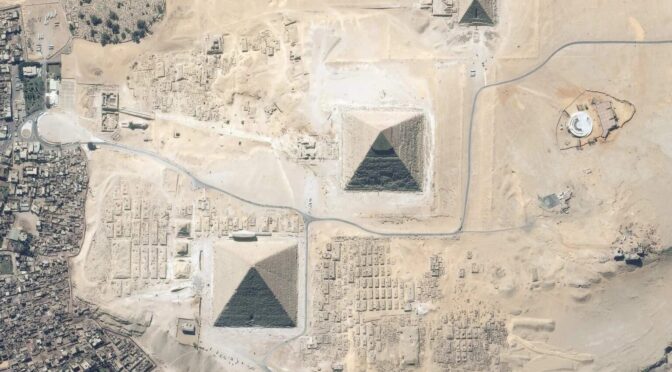 It would seem that near the famous pyramids in Egypt, everything has long been known. But, thanks to new technologies and clear high-quality images from space, new details began to be discovered.

At first glance, it seems to be nothing ordinary – pyramids, like pyramids…

But this is only at first glance. If you enlarge the details of this image, then you can find the barely guessed outlines of giant, clearly artificial rectangular formations that are located opposite the famous pyramids.

For example, at the pyramid of Mikerinos:

At the pyramid of Khafre:

What are these incomprehensible huge geometric objects protruding through the sand dunes?

It may well be that in the thickness of the limestone plateau, ancient artificial underground structures of the disappeared Egyptian civilization of the pharaohs are hidden from prying eyes.

We are sure that the Supreme Council of Antiquities of Egypt is well aware of these objects.

Therefore, permits for archaeological work are issued only in strictly designated places and not at all free of charge, and the more promising such a site is in terms of finds, the larger the contributions (and the contributions, judging by a number of publications, are not at all weak).

In addition, excavations at a number of sites are generally prohibited.

So the Egyptian land will keep its secrets and mysteries for a long time from ordinary inhabitants – you and us.