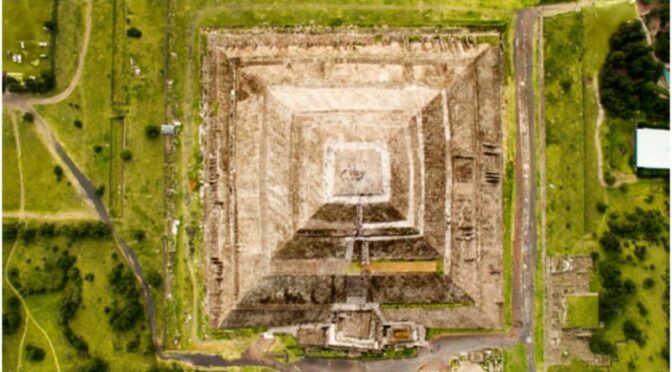 As we use advanced archeological techniques, we appear to create incredible findings at various ancient locations, like Teotihuacan in Mexico.

Recently, in Teotihuacán’s ancient town northeast of Mexico City, archeologists have discovered a secret tunnel under the famous Moon Pyramid.

Hidden for ages, the underground tunnel, as archeologists claim, could represent the underworld as a component of the ancient system of belief in the Pre-Colombian civilization that once thrived here. The Moon Pyramid is the second largest structure seen in Teotihuacán.

The site was most certainly built 2,000 years ago, by a civilization that pre-dates the Aztecs who were later occupants of Teotihuacán.

According to National Geographic, the tunnel extends in length from the central square, known as Plaza de la Luna, and goes toward the nearby pyramid. It is at a depth of about 33 feet and is similar to a few other tunnels that had been discovered in the past.

This newest discovery was made with the help of a method known as electrical resistivity tomography that is able to generate subterranean imagery.

A team of archaeologists from Mexico’s National Institute of Anthropology and History employed the method as part of their conservation effort concerning the central square at the ancient location. Nobody has yet been able to access the tunnel and see what’s hidden inside.

The Pyramid of the Moon could have been used for human sacrifice and a number of other rituals–claims that are based on studies of human remains located at burial sites in the complex.

As the purpose of the tunnel cannot be completely clear at the moment, it is up to further research to learn more details and recover artifacts.

The history of the ancient city of Teotihuacán is complex, but most certainly it was one of the largest cities in the Americas of pre-Columbian times, believed to have housed at least 125,000 people.

“Tenan” is one more name used for the site by some people, which in Nahuatl (Aztec) means “Mother of protective stone.” Estimates suggest the massive structure was built sometime before 200 AD, making it older than its bigger counterpart, the Pyramid of the Sun.

A slope found on the front of the pyramid’s staircase enables access to the Avenue of the Dead, a platform situated on the top of the pyramid.

This place was used to worship the Great Goddess of Teotihuacan, the deity of water, fertility, the Earth, and also creation itself. The platform, as well as a prominent sculpture unearthed at the bottom of the pyramid, are most certainly dedicated to this major deity.

The Plaza of the Moon, from where the newly uncovered tunnel extends towards the pyramid, is just opposite the altar of the Great Goddess. Its structure is composed of a central altar, plus a formation designated the “Teotihuacan Cross.”

There is no doubt that an intelligent construction system was employed to build not only the monumental bases of the two great pyramids but also the entire city.

While evidence suggests the pyramids have undergone several intricate phases of construction, the entire city of Teotihuacán has signs that it was very carefully planned as well, incorporating its main axis and a great palace surrounded by 15 monumental pyramids in the design.

Tombs found in the location have contained human skeletons, but also a variety of animal bones, obsidian blades, pieces of jewelry and a number of other types of offerings. Despite all finds so far, many questions concerning Teotihuacán’s history and culture still need to be answered.