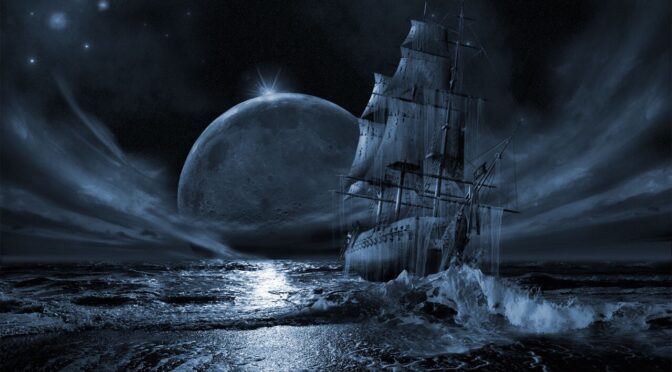 The mystery of the Octavius: An 18th-century ghost ship was discovered with the captain’s body found frozen at his desk, still holding his pen

The world has an array of tales, mysteries, and legends and we are traveling on a different dimension when reading or listening to them. Those stories are thoughtful for everyone who loves a good mystery, and the story about the ship Octavius is very fascinating.

There are a great number of tales in maritime tradition, about ghost ships sailing with the world’s ghostly crew and destined never to make port.

It’s the story of a mysterious disappearance, and a captain, a frozen body, still seated behind his desk and a crew that suffered the same fate. Some people say that this is not a simple legend.

It was October 11, 1775, when the whaler ship Herald stumbled upon a rather strange looking schooner. The crew of Herald thought it probably that the badly weather-beaten boat was drifting, and decided to give it a closer inspection.

On nearing the ship, the crew saw that the ship was weather-beaten–the sails were tattered and torn and hanging limply on the masts. They boarded the drifting Octavius, and there they discovered the reason why there was no activity on deck!

But to understand, we must travel back to 1761, when the journey for Octavius began, fourteen years before she was found by the Herald. Leaving the port of London, the 28 sailors began their journey towards China….

This was a majestic sailing ship, that left port with a full crew, and they arrived safely in China, where unloaded their cargo.

The weather was unusually warm, and it seems that the captain decided to sail home via the Northwest Passage, travel that at the time had not been accomplished. This was the last that anyone heard of the vessel, her crew, or her cargo. And so, Octavius was declared lost.

Fast forward to 1775, when Herald’s crew makes it’s way slowly through the strange, creepy and quiet ship. Below deck, they discovered the 28 sailors, frozen stiff, motionless and blue. And when they reached the Captain’s office, they found him behind his desk, also frozen.

The inkwell and other everyday items were still in their place on the desk. Turning around, they saw a woman wrapped in a blanket on the bunk, frozen to death, along with the body of a young boy.

According to the legend, the captain was still holding his pen as if he was frozen instantly. Herald’s crew reported that the whole crew had the same characteristic, and they were like models in a waxworks museum.

When the Octavius began its journey in 1761, the Captain carefully wrote the date in his logbook, a document that was found on his desk 14 years later (but the last entry in it was from 1762).

The thirteen years between 1762 and 1775 were nowhere to be found! With the realization that they are on board a ghost ship, the men left Octavius and joined the rest of their crew back on board the Herald. According to those who believe that this story is real, it was the Captain’s fault that they all froze to death.

According to this version of the story, the captain of Octavius decided to do a mission impossible: go through the notorious Northwest Passage, and it was this decision that killed all people on board. But, of course, this story was born almost 250 years ago and all traces of it, in reality, are lost over.

Two and a half centuries is a long period, in which stories change and are embellished with other, different details. According to one version, the Octavius got stuck into the ice for two and a half months, and it wasn’t long before they ran out of supplies and froze to death.

But why the captain was still behind his desk with a pen in hand? Furthermore, according to the legend, Octavius did manage to get through the Northwest Passage, but only when was already a ghost ship. The ship’s last recorded position was 75N 160W, which placed the Octavius 250 miles north of Barrow, Alaska.

It took more than a century before another attempt to crossing this passage was made with a ship, but this time successfully. And for hundreds of years, this story survived until became a legend, drifting, just like Octavius and no one knows what really happened, but especially, what is the reason that can freeze a man half-way through his writing, still with the pen in hand!

The crew of the Herald were frightened of the Octavius and feared that it was cursed, so they simply left it adrift. To this day, it has never been sighted again.