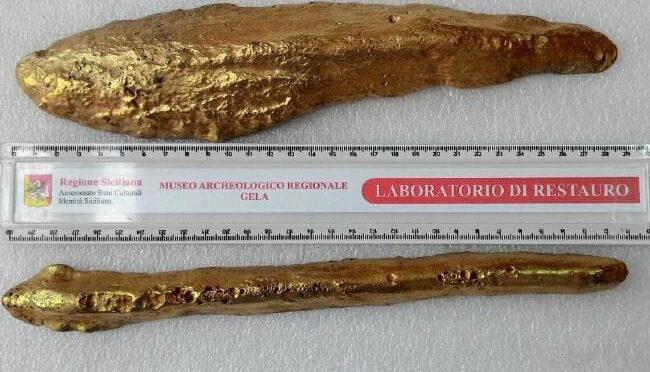 Orichalcum, the lost metal of Atlantis, may have been found on a shipwreck off Sicily

A group of naval archeologists has uncovered two hundred ingots spread over the sandy seafloor near a 2,600-year-old shipwreck off the coast of Sicily. The ingots were made from orichalcum, a rare cast metal that ancient Greek philosopher Plato wrote was from the legendary city of Atlantis.

A total of 39 ingots (metal set into rectangular blocks) were, according to Inquisitr, discovered near a shipwreck. BBC reported that another same metal cache was found. 47 more ingots were found, with a total of 86 metal pieces found to date.

The wreck was discovered in 1988, floating about 300 meters (1,000 ft) off the coast of Gela in Sicily in shallow waters. At the time of the shipwreck Gela was a rich city and had many factories that produced fine objects.   Scientists believe that the pieces of orichalcum were destined for those laboratories when the ship sank.

Sebastiano Tusa, Sicily’s superintendent of the Sea Office, told Discovery News that the precious ingots were probably being brought to Sicily from Greece or Asia Minor.

Tusa said that the discovery of orichalcum ingots, long considered a mysterious metal, is  significant as “nothing similar has ever been found.” He added, “We knew orichalcum from ancient texts and a few ornamental objects.”

According to a Daily Telegraph report, the ingots have been analyzed and found to be made of about 75-80 percent copper, 14-20 percent zinc and a scattering of nickel, lead, and iron.

The name orichalucum derives from the Greek word oreikhalkos, meaning literally “mountain copper” or “copper mountain”. According to Plato’s 5th century BC Critias dialogue, orichalucum was considered second only to gold in value, and was found and mined in many parts of the legendary Atlantis in ancient times

Plato wrote that the three outer walls of the Temple to Poseidon and Cleito on Atlantis were clad respectively with brass, tin, and the third, which encompassed the whole citadel, “flashed with the red light of orichalcum”.

For centuries, experts have hotly debated the metal’s composition and origin.

According to the ancient Greeks, orichalcum was invented by Cadmus, a Greek-Phoenician mythological character. Cadmus was the founder and first king of Thebes, the acropolis of which was originally named Cadmeia in his honor.

Orichalcum has variously been held to be a gold-copper alloy, a copper-tin, or copper-zinc brass, or a metal no longer known. However, in Vergil’s Aeneid, it was mentioned that the breastplate of Turnus was “stiff with gold and white orachalc” and it has been theorized that it is an alloy of gold and silver, though it is not known for certain what orichalcum was.

Orichalcum is also mentioned in the ‘Antiquities of the Jews’ (1 st century AD) – Book VIII, sect. 88 by Josephus, who stated that the vessels in the Temple of Solomon were made of orichalcum (or a bronze that was like gold in beauty).

Today, some scholars suggest that orichalcum is a brass-like alloy, which was made in antiquity the process of cementation, which was achieved through the reaction of zinc ore, charcoal and copper metal in a crucible.

The latest discovery of the orichalcum ingots that had laid for nearly three millennia on the seafloor may finally unravel the mystery of the origin and composition of this enigmatic metal.