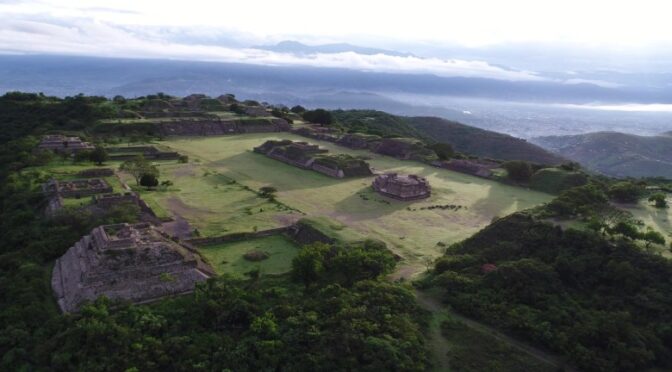 University of Oklahoma researchers have made a finding that they believe could change the world’s view of an ancient capital.

The location of a buried building under the surface of the Main Plaza at Monte Alban, one of the first towns to establish in all of pre-Hispanic Mexico, was recently found by archaeologists from the University of Oklahoma.

The team used ground-penetrating radar, electrical resistance, and gradiometry to locate the structure.

“This discovery changes our understanding of the history of the Main Plaza and how it was organized and used,” said Marc Levine, assistant curator of archaeology at the Sam Noble Oklahoma Museum of Natural History and assistant professor in the Department of Anthropology, College of Arts and Sciences. “Everything is deeply symbolic here.”

The building appears to resemble stone temples that were excavated by Mexican archaeologists in the 1930s.

Evidence from those temples indicates they were used for religious practices like burning incense, making offerings and ritual bloodletting.

The Main Plaza was built, expanded and remodelled over 1,000 years before the site’s collapse around 850 CE.

Archaeologists have investigated many of the buildings erected around the Main Plaza, but have never focused research on the plaza itself to better examine its role in society.

OU researchers hope to develop a clearer picture of what the Main Plaza looked like during its early history and better appreciate the amount of work that went into its construction.

“If you think of the National Mall in Washington, D.C., every monument and every building that goes on that mall has a significance and was thought over, carefully planned and oriented in a certain way,” Levine said. “The same goes for Monte Albán.”

Levine stresses the importance of the site, saying the Main Plaza is even featured on the country’s 20 peso note.

The OU team also used a drone to create a digital map of the Main Plaza and its associated structures. With the help of a supercomputer, the team is creating 3-D images of all the buildings to measure their volume.

This will provide a better understanding of the effort required to move all the dirt and construct the buildings. Levine estimates the team will spend about two years analyzing all of their data to complete their study of the plaza.

“We may find some other things that are important that we haven’t had a chance to process yet,” he added.