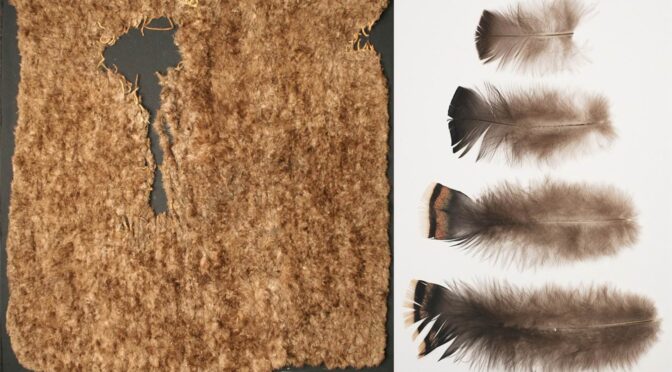 800-year-old Pueblo Indian blanket made out of 11,500 turkey feathers

There are more uses for a turkey than the centerpiece of your Thanksgiving feast. Researchers believe the flightless fowl held a deep significance for ancient Pueblo Indians in the American Southwest, who domesticated the bird but didn’t eat it.

Archaeologists at Washington State University examined an 800-year-old feather blanket from southeast Utah, one of the few remaining examples of its kind. They determined it took more than 11,000 turkey feathers to make the spread, likely plucked painlessly from live birds during molting periods. It would have taken between four and ten turkeys to make this single blanket, now on display at the Edge of the Cedars State Park Museum in Blanding, Utah.

‘The birds that supplied the feathers were likely being treated as individuals important to the household,’ said anthropologist Bill Lipe. ‘This reverence for turkeys and their feathers is still evident today in Pueblo dances and rituals.’

An 800-year-old blanket from Pueblo Indians in the Southwest US took more than 11,500 turkey feathers to make, according to a new report. Turkeys were an integral part of tribal life for thousands of years, and not really a food source until the 11th or 12th century.

To determine how many turkeys would have been needed for this blanket, Lipe’s team counted feathers from the pelts of wild modern-day turkeys ethically sourced from dealers in Idaho.

Such feathers were widely used to make blankets and robes by the Ancestral Pueblo people but, because they’re so fragile, few examples have survived.

‘The goal of this study was to shed new light on the production of turkey feather blankets and explore the economic and cultural aspects of raising turkeys to supply the feathers,’ said Lipe, lead author of a paper in Journal of Archaeological Science: Reports.

Protective fabrics made from animal pelts, fur, and feathers would’ve been needed as tribes ventured into higher, colder elevations in Colorado, Utah, New Mexico, and Arizona. Feathers from modern-day turkeys used to help determine how many would have been needed for the blanket, Researchers counted feathers from the pelts of wild turkeys ethically sourced from dealers in Idaho.

Turkey-feather blankets were made by weaving feathers into nearly 600 feet of yucca fiber cord. The ancestors of the modern-day Pueblo Indians, who include the Hopi and Zuni, tended to live at elevations above 5,000 feet, where the winters were brutal and even summer nights could be cold.

Made by women, the fabrics would have served tribespeople through various stages of life — as blankets for sleeping, cloaks in cold weather, and finally as funerary dressing.

Turkey feathers began replacing rabbit skin as the preferred material for twined blankets between 400 BC and 700 AD, according to Lipe. They lasted longer and plucking turkey rather than skinning hares would have allowed for an ongoing resource.

Turkeys were one of the very few domesticated animals in North America before Europeans arrived but they weren’t really used as a food source until the late 12th century when deer became more scarce.

New feathers could be collected several times a year for the life of the turkey, which could more than a decade.

‘As ancestral Pueblo farming populations flourished, many thousands of feather blankets would likely have been in circulation at any one time,’ said Shannon Tushingham, a professor of anthropology at WSU and co-author of the study. ‘It is likely that every member of an ancestral Pueblo community, from infants to adults, possessed one.’

Surprisingly, the turkeys would have been treated more like pets or members of the family than dinner.

Turkey feathers began replacing rabbit skin as the preferred material for twined blankets about 2,000 years ago. They lasted longer and plucking turkey rather than skinning hares kept the animal alive and made them a renewable resource

Turkeys were one of the very few domesticated animals in North America before Europeans arrived but they weren’t really used as a food source until the late 12th century when deer became more scarce.

Turkey remains found among the ancient Pueblo were usually whole skeletons that had been intentionally buried, not scattered bones in hearths or trash heaps. That indicates a ritual or cultural significance for the birds, Lipe believes.

‘They are right up there with eagle feathers as being symbolically and culturally important,’ he said.