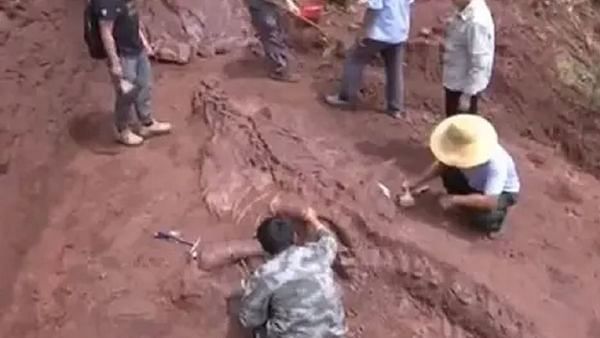 Palaeontologists in southwest China have unearthed a fossil from the Jurassic period that is 70 per cent intact and belongs to a dinosaur believed to be nearly 8 metres in length.

The fossil, which dates back 180-million-years, was discovered in late May in the city of Lufeng, which is in the province of Yunnan in Southern China.

Following the groundbreaking discovery, staff with the Dinosaur Fossil Conservation and Research Center started carrying out emergency excavations to help prevent damage to the remaining bones. It was done quickly as the area is prone to soil erosion, according to reports.

Wang Tao, Head of the Dinosaur Fossil Conservation and Research Center of Lufeng City, said finding a nearly complete Lufengosaurus is very rare, adding that the find is a ‘national treasure’.

“Such a highly complete dinosaur fossil is a rare find around the world. Based on the fossil that was have discovered over the years, on its tail, and thigh bones, we believe this is a type of giant Lufengosaurus, which lived during the Early Jurassic period,” he said.

Photos were taken at the excavation site show workers delicately brushing the red soil to uncover the skeleton.

Lufengosaurus is a genus of massospondylid dinosaurs who lived in the early Jurassic period in what is now known as southwestern China.

The species grabbed international headlines in 2017 when scientists found 195-million-year-old collagen protein in the rib of a Lufengosarus fossil.

This isn’t the only significant dino fossil find in China this year. Back in January, a 120-million-year-old fossil helped researchers and scientists to bridge the gap between dinosaurs and modern birds.

After researchers analysed and studied the fossil, the species was dubbed as ‘Wulong bohaiensis’ or ‘the dancing dragon’ and described as a strange mix between a bird and a dinosaur.

The researchers from China and the United States said the dinosaur was about the size of a raven with a long and bony tail.

Further study revealed its body was covered with feathers with two plumes at the end of the tail.