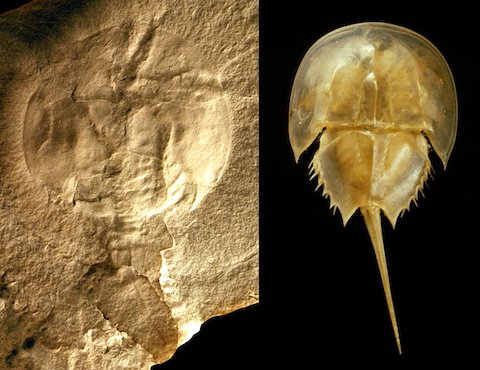 Few modern animals are as deserving of the title “living fossil” as the lowly horseshoe crab. Seemingly unchanged since before the Age of Dinosaurs, these venerable sea creatures can now claim a history that reaches back almost half a billion years.

In a collaborative research article published recently in the British journal Palaeontology, a team of Canadian scientists revealed rare new horseshoe crab fossils from 445 million-year-old Ordovician age rocks in central and northern Manitoba, which are about 100 million years older than any previously known forms.

Although they are more “primitive” in several aspects than other known horseshoe crabs, their resemblance to living forms is unmistakable.

The fossil horseshoe crabs were recovered in the course of fieldwork studies on ancient tropical seashore deposits, providing yet another important link to their modern descendants that are today found along warmer seashores of the eastern United States and the Indian Ocean.

This is particularly significant, explains Rudkin. “Understanding how horseshoe crabs adapted to this ecological niche very early on, and then remained there through thick and thin, can give us insights into how ocean and shoreline ecosystems have developed through deep time.”

Today, marine shorelines worldwide are being threatened by human activity, and although some horseshoe crab populations are endangered, their enviably long record on Earth indicates that they have successfully weathered many previous crises, including the mass extinction that saw the demise of the dinosaurs and many other life forms 65 million years ago.

“We do need to be concerned about horseshoe crabs and many of the other unusual life forms found on marine shores,” said Dr. Young.

“Nevertheless, we can also be mildly optimistic that some of these things have demonstrated a toughness that may allow them to survive our abuse of these environments.”

Living horseshoe crabs are extensively studied, especially in the fields of ecology and medical research. The exciting discovery of these unusual early fossil relatives adds a new introductory chapter to their remarkable story.

David Rudkin is Assistant Curator in the Department of Natural History (Palaeobiology) at the Royal Ontario Museum and holds an appointment to the Department of Geology, University of Toronto, as a Lecturer in palaeontology.

Rudkin joined the former Department of Invertebrate Palaeontology at the ROM in 1975 and began working on fossils from the Burgess Shale in British Columbia.