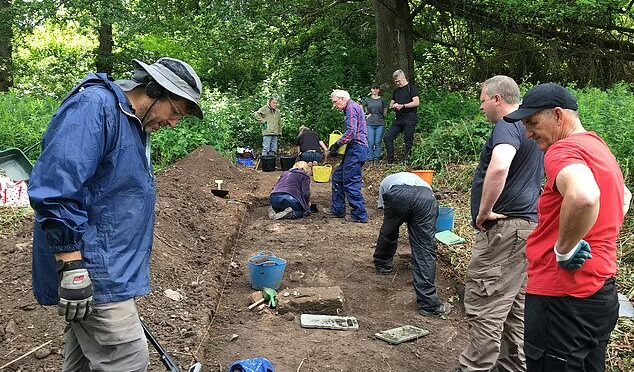 A long stretch of road was uncovered on Saturday during the first-ever dig at Coxet Hill in Stirling. The hill is believed to be where the Scots King Robert the Bruce set up his camp to prepare for the battle ahead of the first day of fighting, on June 23, 1314.

It is also likely to be where the Scottish camp followers and soldiers untrained in Bruce’s tactics were based during the decisive second day when the English army was forced to flee.

These “Sma’ Folk”, concealed by the hill, are said to have emerged once victory was assured to block the line of retreat of King Edward II’s army to Stirling Castle and turned the Scottish victory into a rout.

Stirling archaeologist Dr Murray Cook, who organised the dig to mark the 707th anniversary of the battle, said the stone-built road would have gone around the hill, which was established as a hunting wood for game birds by King Alexander III in the 13th century.

It would have been used by Bruce and his army around the time of the battle, and Dr Cook believes it may also have been the route taken by the Sma’ Folk when they caused panic in the English ranks.

Dr Cook said: “Where we thought we had a boundary around Alexander III’s New Park, it now appears we have a road. We’ve got a 100-metre section of it, probably four metres wide.

“This hard-packed stone road or track curves around the bottom of the Coxet Hill and doesn’t show on any of the maps going back the last 200 years, which suggests a medieval origin.

“The fact it is around the medieval royal wood suggests it was there before the Battle of Bannockburn and was in use at that time. It is logical that it was used by Robert the Bruce.

“Potentially this was also the route used by the Sma’ Folk on the way to [the Battle of] Bannockburn.”

The Battle of Bannockburn was fought on June 23-24, 1314. King Edward II travelled to Scotland to find and destroy the Scottish army and relieve Stirling Castle, which had been under Scottish siege.

Edward’s army of up to 25,000 men far outnumbered the force assembled by Robert the Bruce, but the Scots were victorious. After a day of skirmishes, the second day of the battle ended in a decisive victory for the Scots.

Had the English army retreated to Stirling Castle they might have regrouped to fight another day – and even secured a longer-term victory – but their path was blocked.

The Sma’ Folk, seeing the tide turn in Bruce’s favour, emerged from behind Coxet Hill and caused panic among the English ranks, who fled at the sight of a new force.

Dr Cook added: “When you walk around this area, you are walking where legendary heroes like Robert the Bruce walked. It is astonishing just how much survives.”