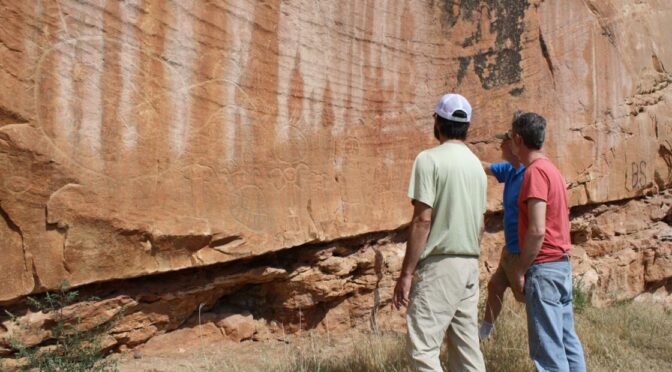 Artefacts found this summer at Medicine Lodge Archaeological Site are slated for radiocarbon dating, which could tell researchers more about when the Crow, or Apsáalooke, people came to the area, according to the Wyoming State Archaeologist.

“This summer, we found Crow ceramics, as well a range of things, from thousands and thousands of flakes and 10 arrow points (or arrowheads), and preforms to make arrowheads, to animal bone from bison as well as bighorn sheep, as well as obsidian,” Wyoming State Archaeologist Spencer Pelton said.

“We really hoped to find Crow ceramics to radiocarbon date, to have a better idea of how old those ceramics are,” he said.

Sharon Peregoy, a member of the Montana House of Representatives who represents the Crow Agency, said that this type of work may help date, early people of the area, preserving — or recovering — a history that can otherwise be lost.

“It helps dispel the concept that the Crow, Apsáalooke, people were new transplants to the area,” she said, adding that in this context, “new” means the arrival of 500 years ago.

“The findings of these types of excavations and research correlates with our Crow oral history, which dates from time immemorial. … Prehistoric,” Peregoy said. “History is important to preserve a homeland for future generations.”

The Office of the Wyoming State Archaeologist is currently doing a ceramics research project, and had hoped to find similar material at Medicine Lodge during its first-ever “public excavation” this summer, Pelton said. The area that is now Medicine Lodge State Archaeological Site has been continuously occupied for more than 10,000 years, according to Wyoming State Parks. In the 1880s it was a working cattle ranch. In 1972, it was purchased by the Wyoming Game and Fish Department, which created the 12,000-acre Medicine Lodge Wildlife Habitat Management Area.

In 1973, a portion of the habitat management area was developed into Medicine Lodge State Archaeological Site. Today, visitors can camp along Medicine Lodge Creek, which flows through a canyon that offers respite in the summer from the hot, dry desert, and warmth and shelter in the winter.

“This spot was undoubtedly a campsite for a long time,” Pelton said. “It’s such an oasis down there, with fresh water. It probably stays fairly warm in the winter from the heat radiating off of the cliffs, and then relatively cool in the summer.

“I know it stays relatively cool in the summer because the moment you climb out of that canyon the temperature increases by 15 degrees,” he said of his experience at the excavation this summer. Because Medicine Lodge is a high-traffic area, and one accessible to the public, it was the ideal place to engage the public with the research.

“We encouraged people to stop by and take a look at what we were doing, maybe screen some dirt,” he said, adding that around 600 people stopped over the summer.

“It turned out really great, and in the process we got some legitimate research done as well,” Pelton said.

The rock art in the valley dates back 10,000 years, and includes petroglyphs and painted rock-art images, or pictographs. The rock art covers the face of a 750-foot-long sandstone bluff, which shelters the area at its base from the wind.

“The rock art certainly includes Crow art,” Pelton said. “When you look at modern Crow art, and look at Crow mythology, you can see a lot of the same motifs on the rock art and cliffs from around A.D. 1400, 1600. A lot of those traditions are still around today.”

Other rock art at Medicine Lodge likely predates the Crow people, he said.

“That is the amazing thing about Medicine Lodge. People probably came and made rock art there for thousands and thousands of years, and we still see the last couple thousand years of it today,” Pelton said. “People were making images on top of each other over and over again.”

Previous excavations done in the 1970s revealed an early presence in the valley.

“It was thought to be an archaeological site created by the ancestors of the Crow,” Pelton said. “(Early researchers) knew that from portions of a ceramic vessel they found there, the rim of a pot.”

Finding ceramics like that is rare in Wyoming, but also valuable as one of the best artefacts for determining ancestry.

“These things are really distinct, and you can track them across time and space to see how those different finds change through time,” Pelton explained. “Our first research priority is getting some radiocarbon dates on some charcoal, and maybe animal bone, with some of those ceramics.”

Another thing found this summer during the public excavation was obsidian, which almost certainly came from the Crow component at Medicine Lodge.

“Obsidian is distinct from all the preceding 12,000 years of prehistory at Medicine Lodge Creek,” he said. “The great thing about obsidian is that you can source it precisely to specific outcrops, so we will know now where these people carrying Crow-style pottery into Medicine Lodge Creek came from. It is probably somewhere in Yellowstone, it could be Teton Pass or it could be all the way over in Idaho.”

Pelton said his office will likely do another public excavation in the summer of 2022. The key is finding a site that is accessible to the public and safe for people to gather.

“The tricky part is finding that perfect confluence of places that are publicly accessible that also have a cool archaeological site buried underneath it,” Pelton said, adding that the tentative plan is to do a similar event at Edness Kimball Wilkins Park in Natrona County. He hopes to reach people there who may not otherwise know about Wyoming’s archaeological past.

“There are some really well-known, easily accessible archaeological sites in that park, and that place gets a lot of visitation,” Pelton said. “We can start reaching a whole other demographic of people who are not normally exposed to this kind of thing, and expand our education and outreach opportunities.”