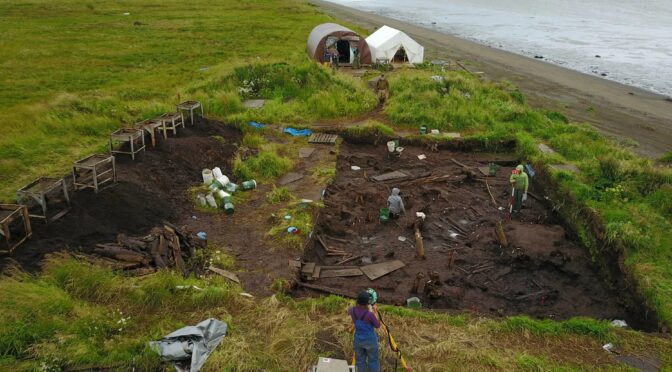 Archeologists have uncovered in Alaska a 350-year-old massacre that took place during a war that might have started over a game of dart. The discovery reveals the gruesome ways in which people were executed in a city and confirms part of a legend passed down by the Yup’ik people over the centuries.

A recent excavation in the town of Agaligmiut (which today is often called Nunalleq) has uncovered the remains of 28 peoples who died during the massacre and 60,000 well-preserved artifacts.

Agaligmiut had a large interconnected complex designed to facilitate defense, said Rick Knecht and Charlotta Hillerdal, both archeology lecturers at Aberdeen University in Scotland who lead the site excavation team.

“We found that it had been burned down and the top was riddled with arrow points,” Knecht told Live Science. Some of the 28 people found “had been tied up with grass rope and executed,” said Knecht, adding that “they were face down and some of them had holes in the back of their skulls from [what] looks like a spear or an arrow.”

When exactly the massacre occurred is not certain, though Knecht said the complex was constructed sometime between A.D. 1590 and 1630. It was destroyed by an attack and fire sometime between 1652 and 1677, he added.

The start of war?

The massacre occurred during what historians called the “bow and arrow wars,” a series of conflicts in Alaska during the 17th century. According to one Yup’ik legend, the conflict started during a game of darts when one boy accidently hit another in the eye with a dart.

The dart-game melee eventually resulted in a series of wars across Alaska and the Yukon.”There’s a number of different tales,” Knecht said, adding that “what we do know is that the bow and arrow wars were during a period of time [called] the little ice age, where it went from quite a bit warmer than it is now to quite a bit colder in a very short period of time.” The colder weather may have caused a food shortage that could have triggered the conflict, Knecht said.

Stories passed down over the centuries tell how the people of Agaligmiut, led by a man called Pillugtuq, put together a war party and went to attack another village that went by various names, including Pengurmiut and Qinarmiut.

The people of this other village had prior warning of the war party, and they ambushed the fighters, killing or scattering all their warriors.

There are a number of stories about the ambush. In one story, women from the other village dressed up to look like men and participated in the ambush, using bows and arrows to attack the war party. Another story says that, shortly before the war party left Agaligmiut, a shaman warned Pillugtuq that Agaligmiut would be reduced to ashes, a warning that Pillugtuq ignored.

After the ambush, warriors from the other village proceeded to Agaligmiut, killed its inhabitants and burned Agaligmiut down. Since most of the men of fighting age were with the war party that had been ambushed, the slaughter consisted of mostly women, children and old men.

Archaeological discoveries confirm this, as the 28 bodies consist mostly of women, children and older men. “There was only one male of fighting age,” Knecht said.

About 60,000 well-preserved artifacts tell what life was like at Agaligmiut before the massacre. The artifacts include dolls, figurines, wooden dance masks and grass baskets.

The permafrost kept the artifacts exceptionally preserved, Hillerdal said. “It’s amazing, a lot of these things could just be used today. Sometimes, we find the wood still bright and not even darkened by age,” Knecht said.

The figurines and dolls were used for a variety of purposes, including religious rituals and as toys. A team from the 3DVisLab at the University of Dundee in Scotland has been using an Artec Space Spider scanner, which they acquired from Patrick Thorn & Co, to create highly detailed 3D scans of the artifacts.

The scans will be digitized into an education package to help students learn about the artifacts at Agaligmiut and what life was like at the site before the massacre occurred.

Research at Agaligmiut is supported by Qanirtuuq Inc., an Alaska Native Village Corporation in Quinhagak.