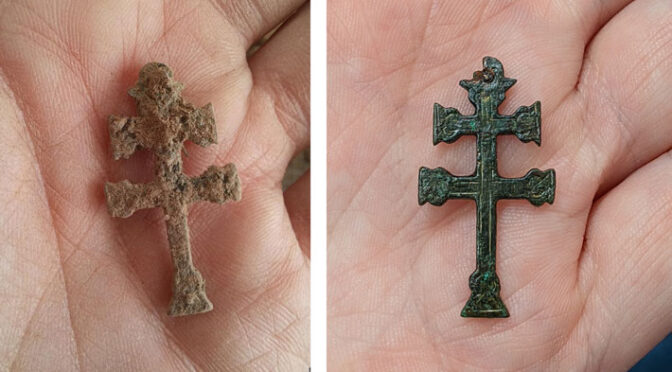 It was a strange object, with two crossbars instead of one, and unusual flared ends on the vertical and horizontal pieces. Stevens, the crew chief at the newly-discovered colonial fort at St. Mary’s, Md., didn’t know exactly what she had, but she knew it was important.

What she had found was a rare 370-year-old Spanish cross that had likely been made in the pilgrimage city of Caravaca, Spain, around 1650 and had made its way 4,000 miles to a meadow in southern Maryland.

But research soon revealed this cross was Spanish in origin and tied to an ancient Spanish legend about the appearance of a miracle cross that held a splinter of the one on which Jesus died.

But St. Mary’s was an English colony.

“What is a Spanish artefact doing here?” Parno said Thursday. . “Given the [tense] relationships between Spain and England it’s always interesting to find a Spanish object.”

The find came on Oct. 25 during excavation of the historic fort at St. Mary’s, the first permanent English settlement in Maryland and one of the earliest in what would become the United States.

Last March, Historic St. Mary’s City announced that the outlines of the palisaded fort, which had been erected by White settlers in 1634, had finally been discovered. Archaeologists had been looking for it since the 1930s.

Maryland’s original 150 colonists, including many English Catholics fleeing Protestant persecution, had arrived at St. Mary’s on two ships, the Ark and the Dove, in late March 1634.

The fort soon began giving up secrets to the archaeologists. Pieces of pottery, pins, hundreds of musket balls and birdshot, arrowheads, a trigger guard for a musket turned up.

Then, last April, Parno revealed that a 380-year old English shilling, made of silver in the royal mint in the Tower of London, had been found — also by crew chief Stevens.

“It was quite a revelation,” Parno said at the time.

Now, here was another one, excavated from what appears to be the cellar of a large building inside the fort.

At first, the archaeologists weren’t exactly sure what it was.

“It stuck out … because it’s got the double bar cross,” Parno said. “Usually, if you’ve got a double bar cross and a slash at the bottom of the cross you associate that with Russian Orthodox or Greek Orthodox.”

“Without that slash at the bottom, it was, ‘Ok, where did this thing come from?’” he said. Was it a French Cross of Lorraine, which has two plain horizontal pieces?

“This one didn’t quite match any of those images,” he said. “It’s got those flares on the ends of the bars. It almost looks like bells, [with] a very ornate almost Baroque design to it.”

“That was when we started really digging into this and found this example of these Caravaca crosses,” he said.

The crosses stem from a 700-year-old legend about angels miraculously delivering a cross, said to hold a fragment of Christ’s cross, to an imprisoned priest who was about to say Mass before a Muslim king in Caravaca.

In later versions of the cross, the angels carry it by the vertical bar, while Jesus hangs crucified on the upper bar. The St. Mary’s cross lacks the angels and the figure of Jesus. “This is sort of the stripped-down version,” Parno said.

The artefact is tiny and fits easily in the palm of a hand. It’s made of a copper alloy, Parno said. And it probably was manufactured in or near Caravaca, about 250 miles southeast of Madrid. It has a broken hole at the top of the vertical piece, perhaps for a necklace or rosary.

But how did it get to Maryland?

Was there a Spaniard at St. Mary’s? There’s no such evidence, Parno said. Was it brought to St. Mary’s by a Jesuit Catholic priest who had visited Spain? Also unlikely, because dates don’t line up well, he said.

Was it carried by a devout Catholic among the settlers? Possibly.

Perhaps the best scenario is that the cross was acquired in a trade with local Native Americans, Parno said.

“We know that Spanish material culture, particularly religious material culture, was … traded in … networks up and down the East coast,” he said. There were then Spanish outposts in Florida and South Carolina. The cross might have been given to Native Americans as part of Spanish missionary work and then traded to someone at St. Mary’s, he said.

“If you have a Catholic colonist who’s interested in a Caravaca cross that an indigenous person is wearing … maybe it was a reverse exchange — an object that was European and ended up in indigenous hands and then ended up back in colonial hands,” he said.

“Every day we’re going out there, we’ve got new mysteries that we’re shaking our heads at,” he said. “Every time we think we’ve figured something out, three more questions emerge.”