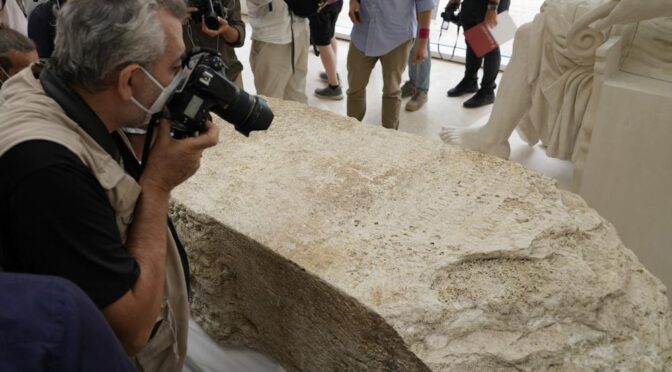 During excavations for a new sewage system, archaeologists unearthed a unique stone outlining the city borders of ancient Rome. It dates from the time of Emperor Claudius in 49 A.D. and was discovered by archaeologists.

Rome Mayor Virginia Raggi was on hand for the unveiling Friday of the pomerial stone, a huge slab of travertine that was used as a sacred, military and political perimeter marking the edge of the city proper with Rome’s outer territory.

It was found June 17 during excavations for a rerouted sewer under the recently restored mausoleum of Emperor Augustus, right off the central Via del Corso in Rome’s historic centre.

At a press conference in the Ara Pacis museum near the mausoleum, Claudio Parisi Presicce, director of the Archaeological Museums of Rome, said the stone had both civic and symbolic meaning.

“The founding act of the city of Rome starts from the realization of this ’pomerium,‴ he said of the consecrated area. The stone features an inscription that allowed archaeologists to date it to Claudius and the expansion of the pomerium in 49 A.D., which established Rome’s new city limits.

Raggi noted that only 10 other stones of this kind had been discovered in Rome, the last one 100 years ago.

“Rome never ceases to amaze and always shows off its new treasures,” she said.

The stone will be on display at the Ara Pacis museum, the Richard Meier-designed home of a 1st-century altar until the Augustus museum opens.