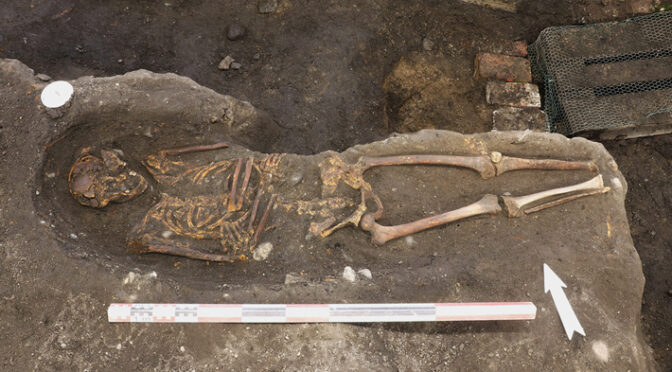 In summer, a somewhat unexpected traces of a large cemetery from the Middle Ages appeared in archaeological excavations in Kjøpmannsgata Norway.

Excavation work in connection with new building schemes took place in Kjøpmannsgata in 2019. As with all new builds in Norway, an archaeological examination of the site in central Trondheim has taken place.

The most highlighted work so far is the unelected cemetery. It’s surprising not only for its location but for its size. To date, 15 individual graves and three pit graves have been found.

Heads were turned last summer when one of these pits was uncovered. It contained the human remains of an estimated 200 people. It is believed these remains were excavated from other cemeteries and reburied here during development work sometime in the 17th century. Two more pit graves have since been found.

As it doesn’t appear on any maps, it is not yet known when this cemetery was built or for how long it has been in use. These are some of the questions archaeologists are hoping to answer during the investigation.

A team from the Norwegian Institute for Cultural Heritage Research (NIKU) is currently working on the site of the former Kjøpmannsgata cemetery under a heated tent.

Archaeologists are closely studying a 12-square-meter area of the cemetery. Although 15 graves have been found so far, they expect the final count to be up to 30. Of those found far, seven were adults, five were children, with three yet to be excavated.

“There are probably even more graves further down. All of these individual graves are in situ, i.e. located in the same place as when they were buried, but several have been partially destroyed. In many cases, only the upper body has been preserved.

The lower half can be cut by, for example, other graves being laid over or by later excavation work.” Those were the words of NIKU project manager Silje Rullestad.

The cemetery has been clearly impacted by several stages of building work, but the team can nevertheless see a clear structure. The northern boundary of the area appears to be marked by a ditch, while four post holes suggest a clear boundary mark.

“This collection and reburial of bones must have been an extensive job,” says archaeologist Monica Svendsen. She is responsible for the digital mapping and documentation of the excavation.

She explains that all three pits consist of deep wooden boxes filled with human bones. They Replaced parallel to the trench that archaeologists assume marks the medieval demarcation of the cemetery.

At the same time as the cemetery excavation is underway, a survey will also be conducted. In collaboration with COWI, NIKU will systematically take samples of soil and human bones to survey soil and biochemical conditions in the cemetery soil.

“From the archaeological excavation of the St. Clement’s Church churchyard, large variations in the degree of conservation of the skeletons were observed. We also see the same here in Kjøpmannsgata. Using the study, we will try to map out why the differences in conservation conditions vary within small distances,” says Rullestad.

The survey could provide a better understanding of the conditions that affect the preservation of human remains.