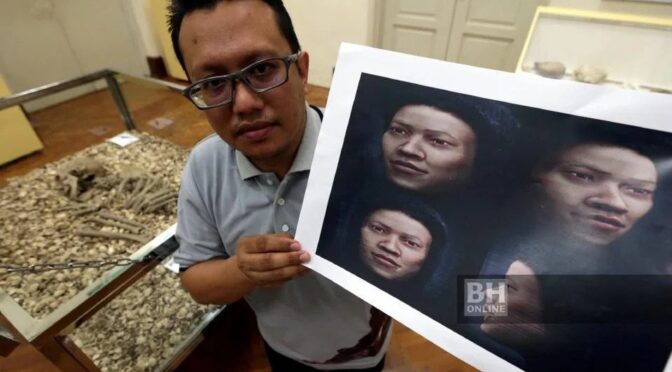 Reconstruction Offers a Glimpse of the Face of “Penang Woman”

This time around, the same researchers have put a face to the Penang Woman using the Forensic Facial Approximation method. The skeleton was found during the construction of a gallery for the Guar Kepah neolithic site in Kepala Batas in 2017.

With the help of Cicero Moraes, a 3D graphics expert from Brazil, they used the 3D virtual reconstruction method to create the Penang Woman’s facial features based on a scientific date obtained from a CT scan performed on the skeleton.

The same team was also instrumental in reconstructing the facial features for the more than 10,000-year-old “Perak Man” using the same method last year.

Shaiful Idzwan Shahidan, the team’s correspondent author, said they took between three and four months to come out with the facial features, which was completed on July 5.

A paper, titled “Forensic Facial Approximation of 5000-Year-Old Female Skull from Shell Midden in Guar Kepah, Malaysia”, was published in the Journal of Applied Sciences on Aug 5.

Shaiful said when they found the skeleton back in 2017, one of their objectives was to conduct a more in-depth study about the life of the Penang Woman.

“We were curious to know how the Penang Woman really looked back then. From the facial features, we can tell that Penang Woman is possibly a mixture between the Australomelanesoid and Mongoloids.

“It is likely that the Guar Kepah population then was a mixture of the Australomelanesian and Mongoloid races,” he said.

Shaiful, however, said a more detailed study could be conducted if Malaysia brought back the 41 skeletons from three shell middens in Guar Kepah, which were excavated by British archaeologists between 1851 and 1934 and are currently at the National Natuurhistorisch Museum in Leiden, Holland.

When the Penang Woman skeleton was found in April 2017, researchers came across a skull, a femur bone and a rib cage beneath the floor of a house which had been demolished to make way for the gallery.

The skeletal remains were the first and only remaining Neolithic skeleton found in a shell midden in Malaysia. Shell middens refer to mounds of kitchen debris consisting mostly of shells and other food remnants and indicate ancient human settlements and are sometimes used as burial sites.

The remains were discovered in shell midden C with her arms folded and surrounded by pottery, stone tools and several types of shells, a sign of her important position in her society.

In total, 41 skeletons from three shell middens, identified as A, B and C in Guar Kepah, were excavated by British archaeologists between 1851 and 1934 and those skeletons are now at the National Natuurhistorisch Museum in Leiden, Holland.

The original Penang Woman is being carefully conserved in USM as it had to be in a temperature and humidity-controlled environment, which meant the skeleton currently showcased at the gallery is a replica of the original.