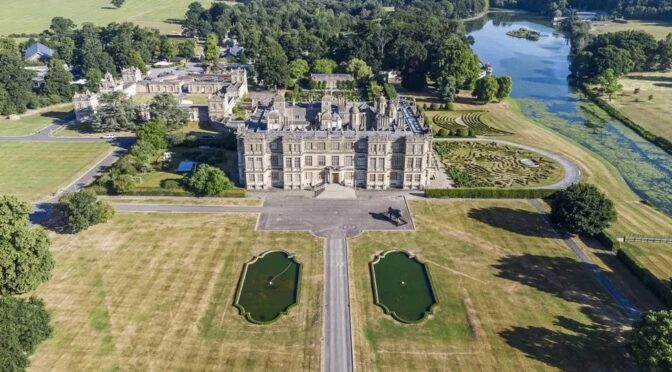 A stately home’s “ghost gardens” have become visible after the recent extreme heat.

Grass on parts of Longleat’s baroque garden in Wiltshire has dried out to such an extent it has revealed historic features long buried in the landscape.

New overhead drone images of the imprints show what the grounds would have looked like in the 17th Century.

The parch marks have been described as an “invaluable window” into the site’s history.

Outlines of pathway fountains, long-lost walls and statues, as well as a maze and bowling green have emerged.

The images hint at what the 70-acre (4,046 sq m) gardens would have looked like four centuries ago.

The earliest visible features discovered so far are parts of the walled gardens to the front of Longleat House.

These date back to earlier in the 17th century and were painted by the renowned Flemish landscape artist Jan Siberechts in 1675, in what is believed to be the first painting of Longleat.

“It is fascinating to be able to see these ‘ghost’ gardens and other features literally appearing out of the ground around the house,” said curator James Ford.

“While we are extremely fortunate to have contemporary engravings and paintings here at Longleat, there is nothing to compare with actual physical evidence.

“These parch marks, that will entirely disappear again when the rain and cooler weather return, provide us with an invaluable window into a lost world and an opportunity to accurately plot the design and layout of these important elements of Longleat’s history,” he added.

As with many of the great estates, Longleat’s formal gardens were transformed into naturalistic parkland in the 18th century by landscape gardener ‘Capability’ Brown.

The 17th Century canals were transformed by teams of workmen, digging by hand, to create Half Mile Pond, which is now home to a colony of California sea lions and a pair of hippos.