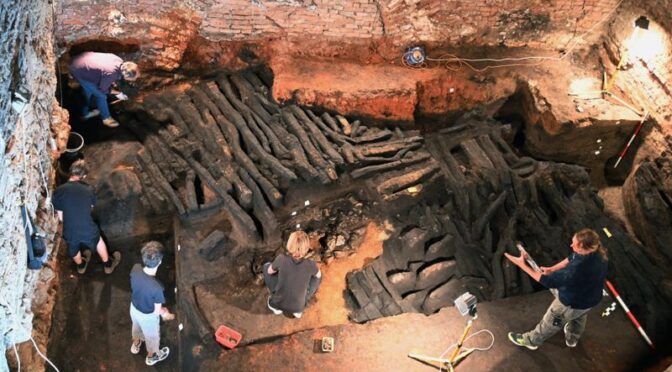 Remnants of Medieval Wall Dating Back to 1041 Unearthed in Breclav, Czech Republic

A remarkable archeological discovery – remains of a medieval wall at the beginning of the 11th century – was uncovered in the planning for restoring the Břeclav castle.

Archeologists claim the fortification was designed by the Duke of Bohemia, Břetislav, who controlled the area and gave its name to the town of Břeclav.

The city of Břeclav in southern Moravia has a rich past. Just a few months ago archaeologists discovered the remains of a boat that is estimated to be thousands of years old and now archaeological research in the bowels of Břeclav Castle, prior to its planned reconstruction, has revealed the remains of a medieval wall that is believed to have been built in 1041.

Archaeologist Miroslav Dejmal of the Archaia Brno organization, who is conducting the research emphasized the importance of the find, saying that walls dating back to the 11th century are extremely rare.

“What you see here are the remnants of a wall made of clay and wood. These are the foundations because the upper part was obviously destroyed by a fire, as you can see from this soft charcoal.”

The original wall, which was hidden for centuries under a thick layer of clay, is estimated to have been around 8 meters high and parts of it are now being analyzed.

Preliminary results suggest that the wall is nearly a thousand years old and dates back to the first mention of the town in written records. Archaeologist Miroslav Dejmal says it is another part of the jigsaw puzzle falling into place.

“The date that we have now from the result of preliminary tests is 1041. This leads us to conclude that it was most likely built by Břetislav, Duke of Bohemia.

When Moravia came under Břetislav’s administration, he invested in its castles and forts, pacified the country and eventually Moravia was incorporated into the Bohemian duchy.

If the date 1041 is a correct estimate, we can say with certainty that Břetislav built a fortified settlement here, which we already suspected, because the name Břeclav itself is derived from the name Břetislav.”

The local authorities are delighted with the extraordinary find, even if it will inevitably delay work on the reconstruction of Břeclav Castle.

The spokesman for Břeclav City Hall, Jiří Holobrádek, says the find has generated great interest among the locals, but it is early days yet to say how and in what way the remnants of this medieval wall will be preserved.

“It is too soon to say how we will proceed. Much depends on the outcome of the expert analysis that has only just started and we will obviously heed the advice of historians and archaeologists. However, given the importance of the discovery, it would be good to find a way to present it to the public.”

The first means of doing that is already clear – archaeologists are working on a 3D model of the wall that looks to be as old as the town itself.