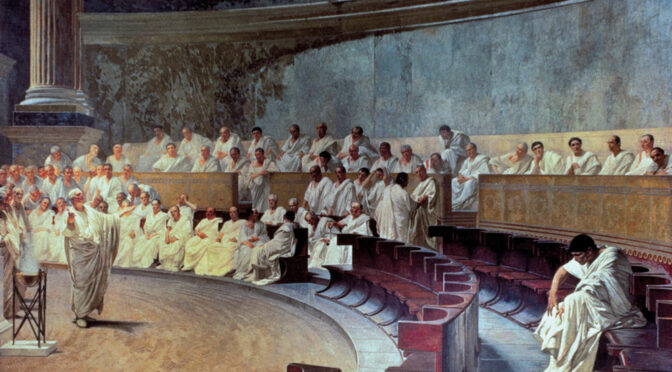 With a history as rich as Egypt’s, there’s really no limit to the type of discoveries that can be unearthed between Sinai to Siwa and down to Aswan.

North Sinai holds the remains of the ancient Egyptian city of Pelusium – an area now known as Tell Farama, which dates back to the Greek, Roman, and Ptolemaic ages.

Remains of a huge Graeco-Roman building, believed to have been the Roman Empire’s main senate, has been unearthed at the Pelusiam archaeological site near North Sinai.

The building was found by the Egyptian archaeological mission working on location in Tel al-Farma in cooperation with the Institute of Archeology and Ethnology of the Polish Academy of Sciences.

The 2,500 sqm building consists of bricks and limestone and contains three main amphitheaters covered with marble.

With the remains of three 60 cm-thick circular benches found at the third amphitheater made of red brick.

“The building was most probably used as a headquarters for the Senate Council of Pelusium, one of the North Sinai’s old cities,” said Mostafa Waziri, secretary-general of the Supreme Council of Antiquities.

The initial studies conducted on architectural planning and the construction of the building indicated that it was used to hold meetings for the citizens’ representatives.

During the rule of the Ptolemies and Romans for taking important decisions about the public affairs of the city and its citizens, Waziri said.

Ayman Ashmawy, head of the Egyptian Antiquities Department at the Ministry of Antiquities, said the 2,500-square-metre building shaped from outside as a rectangular, with circular terraces and the main gate located on the eastern side.

He pointed out that the interior design of the building consists of the remains of three 60 cm-thick circular benches which were built of red brick and covered with marble.

He explained that during the fifth and sixth century AD, the building was used as a quarry where the stones, bricks, and columns were extracted from their original places for use in the construction of other buildings in the city.