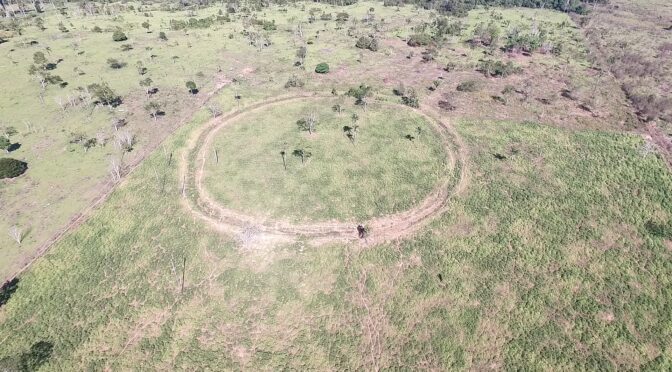 Long before the arrival of Europeans in the Americas, one of the world’s largest rainforests teemed with people who transformed the woods around them, according to archaeologists who have found new evidence of farms, settlements and roads buried beneath the flora of Brazil’s Amazon Basin.

A retiree poring over online satellite images led archaeologists to the ancient earthworks, the most recent in a series of finds made possible by satellite imagery, airborne radar, and drone-mounted cameras that are making ecologists and conservationists abandon longstanding notions of the Amazon as a virgin wilderness.

“It is all one type or another of the human-influenced forest,” said anthropologist Michael Heckenberger at the University of Florida in Gainesville, who wasn’t part of the new project. In the Amazon, “they were weaving their cities out of the forest itself.”

The findings include 81 pre-Columbian clusters of earthworks in the Upper Tapajos Basin, located along the southern rim of the Amazon in the Brazilian state of Mato Grosso.

Dating to 1250‒1500 A.D., the sites range from small ditched enclosures to large settlements with multiple mounds, plazas and causeways, the archaeologists said.

Francisco Nakahara, a retired financial manager in São Paulo who studies free online satellite photos as a hobby, first spotted the traces of circular earthworks, the researchers said. The archaeologists, who reported their findings in Nature Communications Tuesday, then catalogued the discoveries using Zoom Earth and Google Earth.

To verify the finds, the team surveyed and excavated 24 sites, unearthing potsherds and decorated ceramics. In surrounding fields, they found widespread evidence of distinctive dark enriched soil—a blend of charcoal and nutrients unlike normal Amazon earth—suggesting the land was used for intensive farming.

“It is likely that many of these sites were fortified settlements,” said archaeologist Jonas Gregorio de Souza at the U.K.’s University of Exeter, who was the lead author of the study. “These regions, once considered marginal, were probably very densely populated.”

At their height, the settlements may have been home to as many as one million people. Most of them likely succumbed to diseases brought by European explorers and slavers, while the forest reclaimed their homes, roads and plazas, the scientists said.

“Many parts of the Americas now thought of as pristine forest are really abandoned gardens,” said Colorado State University archaeologist Christopher Fisher, who uses aerial laser radar to explore sites in Central America covered by the forest canopy. “When you are on the ground, you cannot really see the landscape. You need a bird’s-eye view.”

Last year, researchers from Brazil, the U.K. and Canada led by Jennifer Watling at the Museum of Archaeology and Ethnography at the University of São Paulo announced their discovery of 455 huge earthworks spread across hundreds of thousands of acres in the nearby Brazilian state of Acre. They also date to pre-Columbian times.

Outlined by ditches up to 12 yards wide and 12 feet deep, these circular and square enclosures are known as geoglyphs were carved into the soil within woodlands that had been managed for thousands of years, the scientists said. Until exposed by modern deforestation, they had been concealed for centuries by the surrounding rainforest.

And in the headwaters of the Xingu River in the Amazon basin, Dr. Heckenberger and his colleagues discovered remains of broad highways and dozens of fortified pre-Columbian villages. The area between these urban centres had been cultivated or managed as parkland, he said.

Such ancient human disturbances still affect the forests today, altering patterns of growth and the mix of tree species. That in turn can make it difficult for climate scientists to judge how much carbon from greenhouse emissions can be absorbed by the Amazon rainforest every year.

“These forests may be much younger than we think they are,” said ecologist Crystal McMichael at the University of Amsterdam, who wasn’t involved in the latest research.