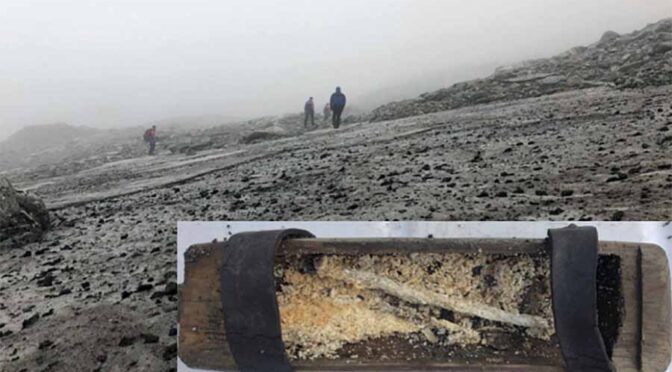 Archaeologists have discovered the remains of a beeswax candle used to assist Vikings to find their farms in a 500-year-old wooden box discovered in a perfectly preserved form when a glacier in Norway melted.

Archaeologists removed the tight lid of the pine box with the leather straps, uncovered in Norway’s Lendbreen ice patch, discovering the candle that was essential to Vikings hundreds of years ago.

The team suggests the box – which was first uncovered in 2019 – was used to transport the long candles that were used by Vikings to light the path between their main farm and summer farm.

The Lendbreen ice patch has become a sought-out destination for archaeologists since 2011 when teams discovered thousands of artefacts sticking out from the melting Norwegian glacier.

At first, the team thought it was a tinderbox that was lost accidentally in the pass, but a further analysis proved otherwise, The History Blog reports.

‘The content of the box was analyzed at the Museum of Cultural History in Oslo: We were in for a big surprise – the content is beeswax!

‘What we are seeing inside the box is very likely the remains of a beeswax candle.’

Candle boxes were a common item among Vikings that were used to house expensive beeswax candles as Vikings made their travels to different farms.

The melting glaciers, brought on by climate change, is creating a valuable archaeological site in Norway, which was an ancient passageway used by Vikings for thousands of years and littered with forgotten artefacts.

The Lendbreen ice patch has produced more than 6,000 artefacts since archaeologists began investigating the area.

Last November, teams unearthed nearly 70 arrow shafts, plus shoes, textiles and reindeer bones on a mountainside in Jotunheimen, about 240 miles from Oslo.

Based on radiocarbon dating, the oldest arrows are from around 4100 BC, with the most recent dating from 1300 AD.

Clothes, tools, equipment and animal bone have also been found by a team in Norway’s mountainous region, according to the journal Antiquity.

Researchers collected a haul of more than 100 artefacts at the site includes horseshoes, a wooden whisk, a walking stick, a wooden needle, a mitten and a small iron knife.

Although a warming world is revealing these extraordinary relics, archaeologists are in a race against time because the ice is what is keeping them preserved.

Archaeologist Regula Gubler told AFP in October 2020: ‘It is a very short window in time. In 20 years, these finds will be gone and these ice patches will be gone.’

‘It is a bit stressful.’

She explained that materials like leather, wood, birch bark and textiles can be destroyed by erosion.

And the only reason they have stayed preserved is because of the ice.