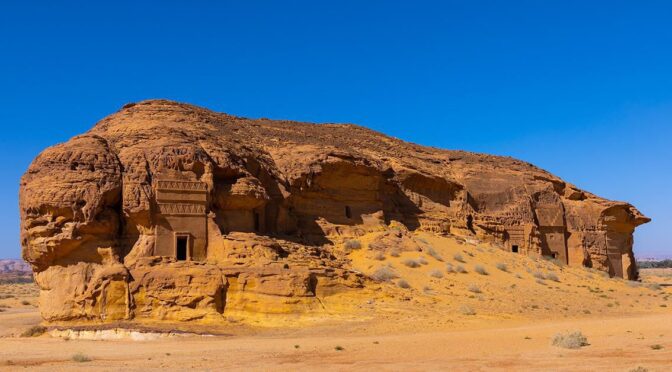 Saudi Arabia is now opening the ancient archaeological site – Hegra – for the public in order to promote historical sites. Hegra, which has been unchanged for nearly 2000 years, is the first UNESCO World Heritage site in the Kingdom.

This lesser-known sister city of Petra in Jordan was founded by the Nabateans, an ancient Arab people who inhabited northern Arabia and the southern Levant.

They had created a huge empire in the desert from the 4th century BC to the 1st century AD when Emperor Trajan conquered them and they became subjects of the Romans. These nomads controlled the spice trade, and later they built an astonishing civilization in the desert.

Petra was rediscovered in the 19th century, however, the earliest historic location in the kingdom — Hegra — was left forgotten by all but the Bedouin until recent decades. But all that remains now of the city they built is some rock-cut tombs and relics.

Over 90 of the total 111 tombs recorded at the location are decorated. Many of the tombs have inscriptions, written in an early form of Arabic that “warn the living not to interfere with the tombs”, according to a report.

One inscription reads, “May the lord of the world curse upon anyone who disturbs this tomb or opens.” The site also features some 50 inscriptions of the pre-Nabataean period and some cave drawings.

According to UNESCO, the site “bears witness to the development of Nabataean agricultural techniques using a large number of artificial wells in the rocky ground”.

The remains at Hegra show a lot of Roman influence as it was also once subjugated by the Romans. Despite the Roman subjugation, the city of Hegra continued to prosper until the 3rd century AD.

Ever since the city fell into decline, it had been left practically undisturbed for almost 2,000 years. It was abandoned by the Middle Ages, but the Ottomans built a fort at the site during World War 1 during the Arab revolt which was instigated by Lawrence of Arabia.

Earlier this year, Saudi Arabia’s tourism minister had said that the country could see a decline in the tourism sector this year due to measures taken by the government to fight the coronavirus pandemic.

Saudi Arabia is now determined to wean its economy off the petro pipeline.

It is a roadmap for the kingdom over the next two decades to transform into a global hub for trade and tourism that connects Africa, Asia, and Europe. Also, magnificent antiquities in Saudi Arabia are being promoted as must-do itineraries for travellers seeking undiscovered locations.